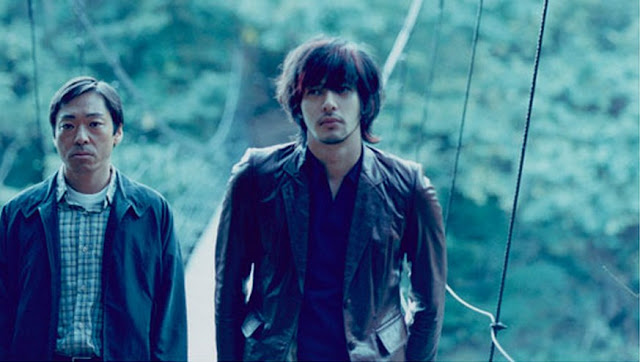 Is all that we see or seem
But but a dream within a dream?
- Edgar Allen Poe

The human mind loves to try to bring order to chaos.  That is why readers are drawn to classic detective fiction like that of Sir Arthur Conan Doyle or Agatha Christie where we marvel at the ability of Sherlock Holmes or Hercules Poirot to solve the mystery conclusively by bringing together threads of clues and witness testimonies.  The modern detective; however, will tell you that such eyewitness testimony is often not very reliable.  Not only can it be coloured by prejudice, but the human mind can sometimes play tricks on us.

The first sign in Sway (ゆれる, 2006) that Takeru Hayakawa (Joe Odagiri) is not a reliable witness comes when he returns to his home town for his mother’s funeral. The self-anointed black sheep of the Hayakawa family, Takeru barges late into the funeral services dressed head to toe in red, inciting his father (Masatō Ibu) into a rage over his lack of filial piety.  The root of the bad feeling appears to be Takeru’s decision to reject joining the family business – a non-nondescript gas station – to become a big shot photographer in Tokyo.  Yet, Isamu Hayakawa’s extreme reaction to his son suggests the strife runs even deeper into the family’s history.

The older brother Minoru (Teruyuki Kagawa), tries to bridge the yawning chasm between them by giving Takeru their mother’s Fujicascope projector and old 8mm home movies she took when they were little.  One of the 8mm reels contains footage of a family outing to Hasumi Gorge, where Minoru recalls fondly fishing there with their father.  Takeru does not remember ever going to the gorge and Minoru teases him, telling Takeru prophetically that he has selective memory made cloudy by the Tokyo smog.

The camaraderie between the brothers sours when Takeru decides to seduce his old girlfriend Chieko Kawabata (Yōko Maki).  Chieko has been working for the Hayakawas since the company she used to work for went under.  She had a friendly, flirtatious relationship with Minoru and he’d been hoping she might take a fancy to him.  Chieko joins the brothers on a trip to visit Hasumi Gorge, and her shocking sudden death at the old suspension bridge is the mystery that sets into motion the remainder of the film.  However, whether or not Minoru was responsible for Chieko's death is really just a red herring.  The true question is whether or not this tragedy will bring the brothers closer together or tear their tenuous relationship apart forever.

Director Miwa Nishikawa has a deft hand for creating dramatic tension in her screenplays.  Whereas the master of suspense, Alfred Hitchcock, would create it by showing the audience more than what the characters know, Nishikawa creates suspense by withdrawing visual information from us.  We only see as much of the events on that fateful day as Takeru can remember, and we are drawn into his struggle to find a way to help his brother avoid being sentenced to prison for murder while remaining true to himself.  We share Takeru’s frustration at not knowing all the details of what led to Chieko falling from the bridge.

Sway is an extraordinary film which at turns recalls the themes of Akira Kurosawa’s Rashōmon (1950), the mysterious beauty of Peter Greenaway’s Picnic at Hanging Rock (1975), and the withholding of information narrative structure of Atom Egoyan’s Exotica (1994).  The colours in Sway are muted, but beautifully done and like Hitchcock and Kurosawa one has the impression that every frame of the film was carefully composed ahead of the filming.  It’s the type of film one needs to watch more than once in order to appreciate the subtle nuances of expression and meaning.

The Japanese DVD release of Sway has excellent English subtitles for the feature, no subs for the extras.  The film was so well received at festivals that it also got a US release.


Directed and Written by Miwa Nishikawa

Original Music by the Cauliflowers

Posted by Cathy Munroe Hotes at 9:42 am