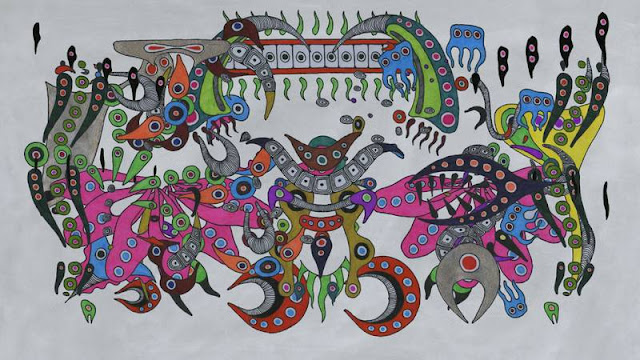 “This living thing has one sound but a thousand forms.”

Mirai Mizue continues his experimentation with music and movement in his latest “cell animation” Tatamp.  Not to be confused with the animation technique of “cel animation”, Mizue’s unique style of “cell animation” is hand-drawn and coloured on paper then scanned onto the computer for editing.  The name refers to the fact that the creatures that he draws resemble amoeba and other minute organic creatures one might find under the lens of a microscope.

As the onomatopoetic title Tatamp suggests, sound designer twoth (aka Shinichi Suda) employs a number of different percussive sounds (shakers, synth, snare drum, etc.) in this piece in addition to harp, whistle, loon calls and other experimental noises.  As with Jam (2009), the film begins in a minimalistic fashion with one sound being represented by a moving shape or shapes.  The cells splash onto the screen and disappear like fireworks exploding in the sky.  The appearance and movement of the shapes is directly related to the timbre and duration of each sound.

The more full the soundtrack, the more full the screen is with shapes, and as the tempo increases, so too the movement of the shapes.  The score follows a pattern of rising and falling with the screen alive with abstract shapes and a chaos of movement at each peak.  The grand finale is an explosion of colour and movement with the individual “cells” layered densely on the screen.  Another fantastic film from Mizue in the tradition of visual music.

Learn more about Mirai Mizue and order his DVD from CALF.  The DVD is also available from British Animation Awards.