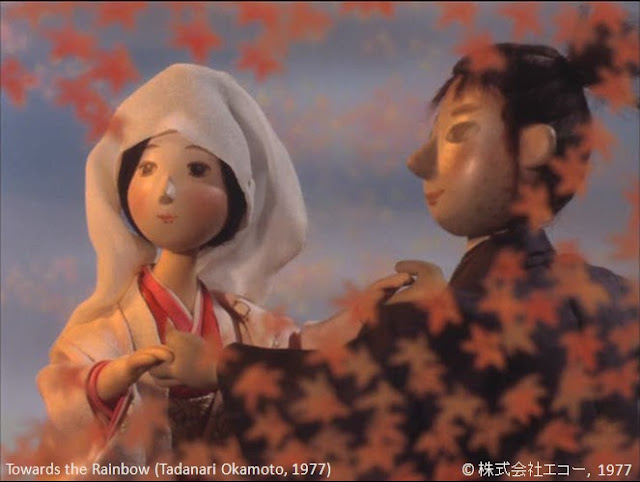 The great puppet animator Tadahito Okamoto (岡本 忠成, 1932-90) was at his most prolific during the 1970s, sometimes creating two or even three short films per year.  The most beautiful of these is Towards the Rainbow (虹に斑って/Niji ni Mukatte, 1977): a story of love conquering all odds.  The 18 minute short is adapted from the folk tale Futari ga kaketa Hashi (ふたりがかけた橋) by Etsuo Okawa about two young lovers separated by a river.

The story is narrated by screen legend Kyoko Kishida, who lent her voice to numerous puppet animations by both Okamoto and his friend and colleague Kihachiro Kawamoto.  The story is interwoven with the music of folk singer Kōhei Oikawa, who adapted the story Futari ga kaketa Hashi into song for the film.  Okamoto had used Oikawa once before for the music for Praise Be For Small Ills (南無一病息災, 1973).

Okamoto sets the scene with an ancient, creased map of two communities in the mountains that are separated by a fast flowing river.  The divided communities feud with each other with the young boys calling names and throwing rocks at each other across the deep gorge.  A young girl on one side of the river collects flowers which she offers the boys on the other side of the river as a gesture of goodwill, but she is cruelly struck down by stones.  A young boy tries to stop his older peers from continuing to throw stones at her and is struck down himself.

From that moment on a friendship blossoms between the girl and boy.  One day, he brings her a present in a basket which he tries to send to her side of the river along a rope, but some boys tear the rope out of her hands and the basket washes away in the river.  In spite of all these obstacles, their love for each other only grows stronger.  When the boy grows into a young man, he braves the terrible current of the river with his raft to visit his love on her side of the river.  Their love seems impossible for both are bound by responsibilities to their own families and communities.

The young man decides to build a bridge across the river and sets to work with supporters from his village.  However, the river is too strong and knocks the bridge down.  In her distress over the seeming impossibility of their romance, the woman falls into the river and the young man rescues her.  As she lies in shock in his arms, the couple sees a magical display of white cranes forming a bridge over the river and the woman experiences a vision in which she dances on a rainbow joining the two communities.  This vision inspires them with the idea of building a new kind of bridge that does not need a support beam.  The tale promotes the value of devotion, dedication, and perseverance. 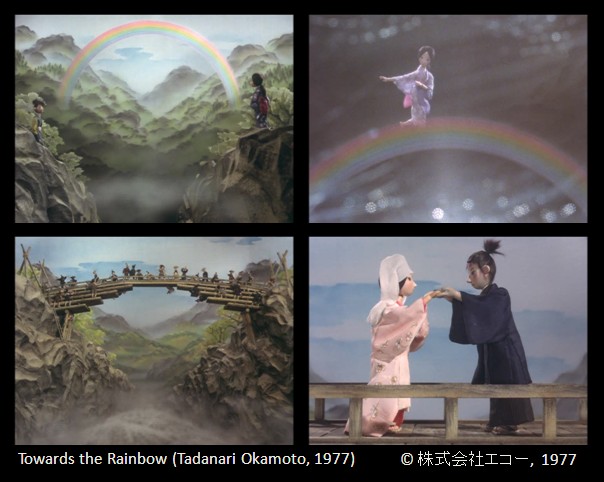 Towards the Rainbow is a truly spectacular stop motion animation.  The puppets were handcrafted out of wood and cloth and the misty backgrounds and sets – which are similar to those used in Okamoto’s previous film The Strong Bridge (ちからばし, 1976)  – have been made with an eye to historical accuracy.  Okamoto is said to have done extensive research about how such bridges were designed and constructed in the period in which the film is set.  The attention to detail practised by Okamoto and his puppet and art designers can be seen in everything from the men having stubble on their faces after a long day of work to the use of a professional choreographer to assist with the young woman’s dance on the rainbow in the dream sequence.

In the opening sequence the young girl is shown picking flowers in a field of higanbana or red spider lilies – which fans of Japanese cinema will recognize from Yasujiro Ozu’s film Equinox Flower (彼岸花/Higanbana, 1958).  Higanbana – which also appear on the cover of the original storybook – usually bloom around the autumn equinox near countryside graveyards and are associated with the journey of the soul into the next world.  It is clear that the bridges being built in Towards the Rainbow, are not just literal but spiritual as well.  The film comes full circle, beginning and ending in autumn with the narrator declaring that the young heroine in her bridal garb is more beautiful than the autumn leaves.

Posted by Cathy Munroe Hotes at 4:00 am