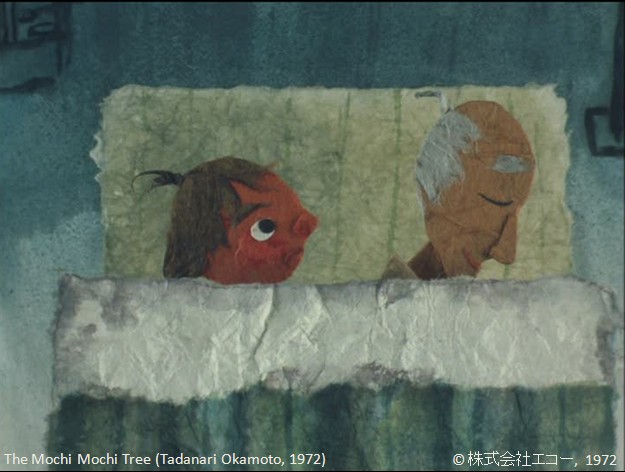 Ever since reading about Tadanari Okamoto and Kihachiro Kawamoto’s joint Puppet Anime-Shows (川本+ 岡本パペットアニメーショウ) on Anipages, I have wanted to learn more about them.  Had the two Japanese masters of puppet animation met working on puppets for stop motion pioneer Tadahito Mochinaga’s MOM Productions – the studio that famously did the puppet animation for Rankin/Bass’s beloved children’s classics like Rudolph the Red-Nosed Reindeer (1964) – or had they met earlier?  How did the idea for the Puppet Anime-Shows develop?  What was screened at the events?

According to Kawamoto's account in Kihachiro Kawamoto: Animation and Puppet Master (Kadakawa Shoten, 1994), Kawamoto and Okamoto met for the first time at the farewell party Mochinaga hosted for Kawamoto when he departed for Prague to study under Jiri Trnka in 1962.  Okamoto’s enthusiasm for the future of puppet animation in Japan made quite an impression on Kawamoto and became the basis for their friendship.

Shortly after Kawamoto’s return to Japan, Okamoto quit MOM Productions and founded his own animation studio in 1964 which he named Echo Productions.  Okamoto’s first independent film A Wonderful Medicine (ふしぎなくすり, 1965) impressed Kawamoto with its fresh style and subject matter.  However, from the very beginning it was clear that the two men had very different approaches to puppet animation.  Okamoto was able to produce many more films than Kawamoto because he took advantage of the need for educational films for schools.  This meant that Okamoto had a steady source of income for producing animated puppet films and employed a studio system of animating.  He employed a team of talented artists including Sumiko Hosaka, Fumiko Magari, and Hirokazu Minegishi to assist with the construction of puppets and assisting with the animation.

In contrast, Kawamoto worked as an independent artist in the 1970, making the dolls himself, making their costumes, constructing the sets, and doing the animation with very little money for staff to assist him.  Much of Kawamoto’s work was funded by making puppets for NHK’s children’s programming such as Okaasan to Issho (1966), Cinderella (1973), and Yan Yan Mū-kun (1973-75). 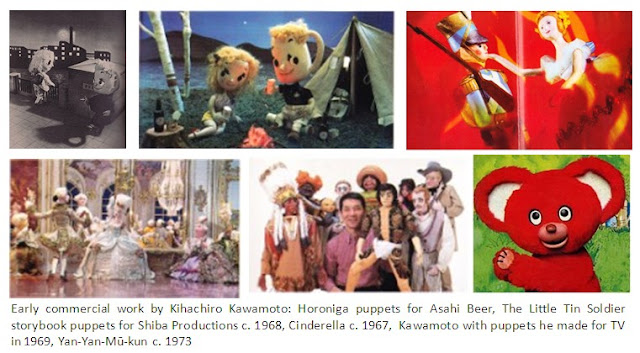 In the early days of their independent work, Kawamoto and Okamoto began to spent a lot of their free time together, not only to talk about their work but also going on ski trips and other excursions together.  It was on one such outing that Okamoto, who had already hosted a solo show of his own work, suggested putting together a joint puppet animation show.

In hosting their Puppet Anime-Shows, Okamoto and Kawamoto faced two major obstacles: finding enough material to screen and funding the event.  Because puppet animation is a time consuming process, Kawamoto could only complete a new work every couple of years.  Even Okamoto, with his larger staff, could only produce two to four short films a year.  With only a handful of new works, they needed something to fill out the programme to make it a proper event.  Kawamoto came up with the idea of including live puppet theatre performances.   Not only would this lengthen the programme, but live shows could also incorporate the humorous aspects of puppet performances. 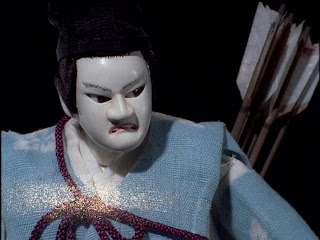 Hosting these Puppet Anime-Shows in addition to their usual puppet animation production schedules was hard going for Kawamoto, Okamoto, and their staff.  The positive reaction of the audience to the screenings and performances outweighed any hardships that they experienced and made it all worthwhile for them.  Kawamoto has said that if it were not for Okamoto and the Puppet Anime-Shows his work would never have amounted to much.  The period during which they held the Puppet Anime-Shows was the time that Kawamoto felt that he truly became an artist.  Ten years after the curtain closed on the final Puppet-Anime Show, Kawamoto was able to pay a final tribute to his friend and puppet show collaborator by completing The Restaurant of Many Orders (注文の多い料理店, 1991), the film that Okamoto left unfinished when he died suddenly of liver cancer at the age of 62.

What puppet films were screened at the Puppet Anime-Shows?  Read Part II to find out.

Posted by Cathy Munroe Hotes at 9:00 am