Can time be made to stand still? Can it be reversed? Koji Yamamura’s Muybridge’s Strings is a meditation on this theme, contrasting the worlds of the photographer Eadweard Muybridge—who in 1878 successfully photographed consecutive phases in the movement of a galloping horse—and a mother who, watching her daughter grow up, realizes she is slipping away from her. Moving between California and Tokyo, between the nineteenth century and the twenty-first, the film focuses on some of the highpoints in Muybridge’s troubled life and intercuts them with the mother’s surrealistic daydreams—a poetic clash that explores the irrepressible human desire to seize life’s fleeting moments, to freeze the instants of happiness. Enriched by Koji Yamamura’s refined artistry and Normand Roger’s soundtrack, Muybridge’s Strings observes the ties that cease to bind, fixes its gaze on the course of life, and presents a moment in time suspended on the crystalline notes of a canon by J.S. Bach. (2011,12’39”) Source: NFB

From September 17 until October 7th, visitors can either watch a half hour screening dedicated to Muybridge’s Strings and how it was made or an hour-long program of recent works by Yamamura with some of his favourite NFB animated shorts including Wendy Tilby and Amanda Forbis’s latest work Wild Life (2011). The other Yamamura films being screened are Fig (無花果/Ichijiku, 2007), which was Yamamura’s contribution to Image Forum’s omnibus animation Tokyo Loop (read review), and A Child’s Metaphysics (こどもの形上学/Kodomo no Keijijyōgaku, 2007). A Child’s Metaphysics is a terrific little film but was a bit overshadowed by the success of A Country Doctor (カフカ田舎医者/Kafuka Inaka Isha, 2007) which was released in the same year. A Child’s Metaphysics is available on DVD in the States

from Kimstim/Zeitgeist.
Program A (28 minutes) 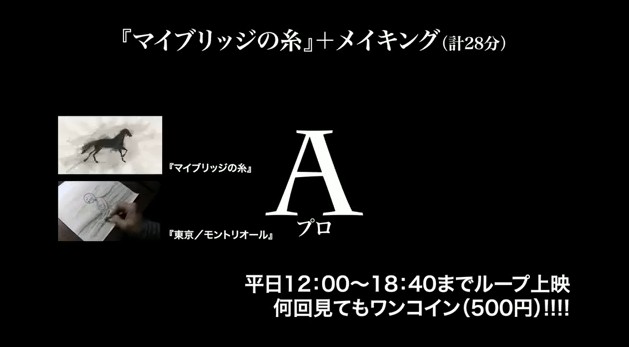 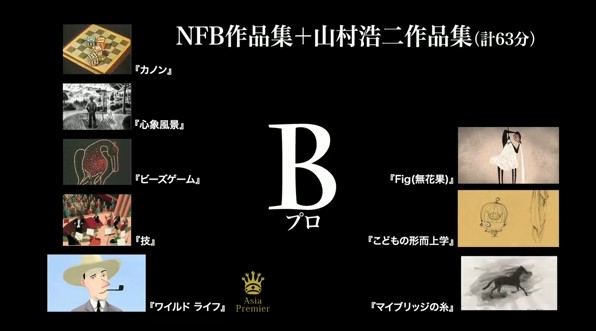 Tokyo Loop (JP only - but no dialogue)

From the US:
Posted by Cathy Munroe Hotes at 6:23 pm