It seems only fair to shine a spotlight on the Oscar-winning art director Shinobu Muraki (村木忍, 1923-1997) after shining it on her husband Yoshiro Muraki (村木与四郎, 1924-2006) yesterday. Because Yoshiro Muraki was part of Akira Kurosawa’s inner circle of trusted collaborators, his name is more likely to be recognized outside of Japan, but Shinobu Muraki had an equally illustrious career. Unfortunately for us in the west, the vast majority of the films she worked on have not been widely distrusted outside of Japan. Muraki worked on over 95 films in a career that spanned more than 40 years. She is particularly known for working on the films of Kon Ichikawa as well as the popular Toho comedy series of the 60s and 70s with directors such as Toshio Sugie (15 films) and Shūe Matsubayashi (11 films). In 1993, Muraki was awarded the Order of Purple Ribbon for her contributions to Japanese culture.
Here are ten more things that I know about her:

6. The Young Guy Series (Wakadaishō Series/若大将シリーズ)
This popular film series of the 1960s and 70s starred Yūzō Kayama (加山 雄三, b. 1937) as Yuichi Tanuma (田沼雄一). A mix of screwball comedy and romance, the series shot in exotic locals (Rio, Hawaii, the Alps, New Zealand) and was a part of the youth culture of the times. Music plays an important role in the films with Kayama singing and playing the electric guitar. The biggest musical influence on the films were The Ventures, who were wildly popular in Japan in the 60s and continue to draw audiences there whenever they tour. there As genre films, they are comparable to Hollywood fare of the day like the Gidget films or Annette Funicello and Frankie Avalon in the Beach Party film series. Muraki worked on 5 films in this series.

Shinobu Muraki's Filmography is a work-in-progress on the wiki Japanese Women Behind the Scenes
Most of the films mentioned in this blog post are
available on DVD in Japan including these Ichikawa films: 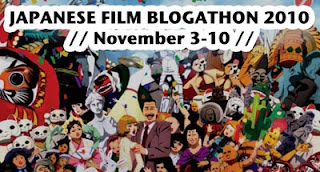 This blog entry is a part of the Japanese Film Blogathon 2010.
© Catherine Munroe Hotes 2010
Posted by Cathy Munroe Hotes at 5:12 am