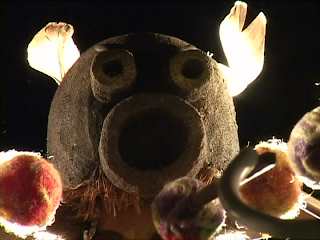 When I find myself in a funk of late, I find the best remedy is watching OOIOO’s music video for their song UMO (2006). The song has a tribal beat and chant, and the enthusiasm of the performance is infectious.
The pairing of Shoji Goto as director with OOIOO is a stroke of genius. His stop motion animation movement and dynamic editing complement the rhythms and musicality of the song. The quirkiness of the puppets matches the avant-garde nature of the band itself. The lyrics are fairly incomprehensible but the intercut natural imagery suggests that the song is a kind of eco-warrior cry to action. The key visual metaphor for interpreting the environmental theme is a deer standing in the sand of an hour glass and the sand runs out: 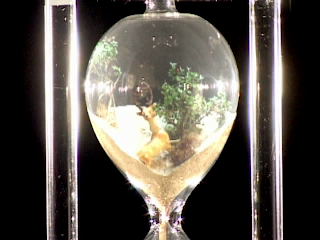 There are so many things to love about this video. Puppet animators often claim that certain stories cannot be told by human actors and can only be told by puppets. I think that the use of puppets in this video is a great example of that because it puts a focus on the message of the song rather than on the members of the band themselves. So many music videos are about selling the performer rather than the performance, so it is such a pleasure to watch a film that is all about the music and the message. The mix of different animation styles and documentary footage is brilliant and I like the way the animation increases in visual complexity to match the increased fervor of the performance. 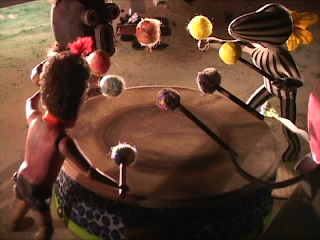 About the band – OOIOO
OOIOO is an all-female avant-garde music group from Japan. Their style is difficult to define because it varies from song to song. This song has a very tribal feel to it, while others have a more relaxed, soothing feel. I have heard that their live performances are amazing. UMO appears on their 2006 album TAIGA.

Taiga
OOIOO
About the animator – Shoji GOTO (後藤 章治, b. 1973)
In addition to being a graphic designer, film director, and animator, Goto is also a musician himself. His strong connections with the music scene mean that most of his work is music related. He is particularly known for designing s a wide range of items for Japanese bands including album covers, T-shirts, flyers, and music videos.
Bonus fact: GOTO also used this concept in a TV ad for Glico: