Ten Things That I Know About Takashi Sasano, the One Scene Wonder 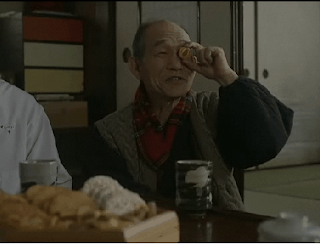 Takashi Sasano (笹野高史, b. 1948) is one of my favourite character actors. He’s appeared in so many films and television series that his face is a familiar sight to Japanese audiences. With only the widening of his eyes, Sasano can have an audience erupt with peals of laughter. At the same time, he has a great range and depth in serious roles. Sasano recently jumped onto the radar of Western audiences when the Yōjirō Takita’s Departures

(おくりびと, 2008) scooped up the Best Foreign Language Film award at the Oscars in 2009. He plays the role of Shokichi Hirata in that film. 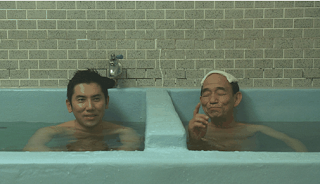 Sasano (right) in Departures
1. He was born on the island of Awaji to a family of sake producers. He was the fourth son in the family, but his parents died when he was still a child.
2. In 1968, while studying Film at Nihon University, Sasano joined the company of Jiyū Gekijyō (Freedom Theatre). He dropped out of university, but he staying with the theatre group until 1982.
3. Sasano appears frequently in the films of Yōji Yamada (山田 洋次). Notable among these many collaborations are many of the Tora-san 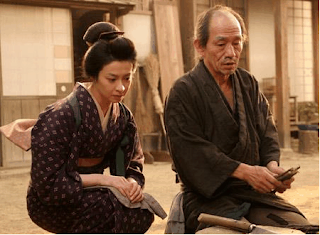 4. Sasano was awarded Best Supporting Actor at the Japanese Academy Awards in 2007 for playing the role of Tokuhei in Yōji Yamada’s Love and Honour

(武士の一分/ Bushi no Ichibun, 2006). His performance in this film also garnered him with a Kinema Junpo Award and a Mainichi Film Concours. 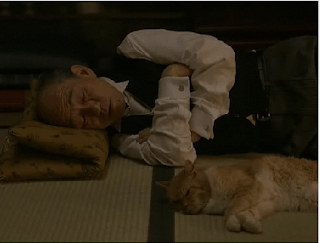 Sanko-Seika spot for senbei crackers
5. He calls himself a “one scene actor” because he never turns down a role, no matter how small. This year alone he appears in three feature films, a made-for-TV movie and three TV series. He also does a lot of television commercials. 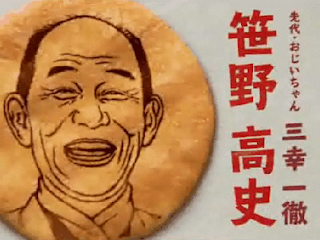 Sasano's face imprinted on senbei for a Sanko-Seika campaign
6. At age 42, Sasano finally parted ways with bachelorhood, marrying a woman 17 years his junior.

9. He has written a memoir called Taiki Bansei in which he pokes fun of his status as a late-bloomer and character actor (never a leading man).  I love how the cover highlights his trademark receding hairline.
10. You can follow him on Twitter under the username sasano61

Dear Doctor
One Million Yen Girl
About Her Brother


Available from the USA: