On my return flight to Europe this summer I lucked out in finding a Yōji Yamada (山田洋次, b. 1931) film on KLM’s in-flight entertainment system. With a filmography of over a hundred films (as either writer or director) and a Shochiku career spanning over half a century, a Yamada film rarely disappoints. From the hilarity of the Tora-san films

(たそがれ清兵衛/Tasogare Seibei, 2002), Yamada’s oeuvre has a depth and range that is arguably unparalleled by any other living director. 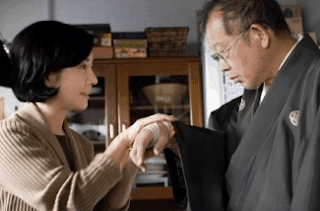 The brother-sister bond
About Her Brother (おとうと/Otōto, 2010) opens with a dedication to Kon Ichikawa’s award-winning film of the same name Her Brother (おとうと/Otōto, 1960). “Otōto” literally translates as “little brother” and as the official English titles indicate, the central relationship of both films is that of an older sister and her little brother. I have only seen excerpts from Ichikawa’s film in documentaries as it is a rare film outside of Japan (despite the fact that it won an award at Cannes!). From what I can gather, Yamada’s film is not a remake, nor is it an adaptation of the original novel by Aya Koda. Rather, it is thematically inspired by Ichikawa’s film. In both films, the younger brother is the black sheep of the family and his behaviour causes particular trouble to his older sister. I also know that Yamada reused the scene in which the two siblings sleep with their wrists tied together by a pink ribbon. The biggest difference seems to be generational: where the siblings in Ichikawa’s film look to be in their twenties or thirties, in Yamada’s film they are a generation older.
Yamada’s film begins with the titular brother already estranged from the family. His niece Koharu (Yū Aoi of One Million Yen Girl, Hula Girls

) is celebrating her impending marriage with her mother Ginko (Sayuri Yoshinaga of Kabei: Our Mother

, Mishima: A Life in Four Chapters

). The women also serve a glass of wine for Koharu’s late father, placing the glass by his photograph on the family shrine.
Indeed, everyone  is looking forward to Koharu’s wedding with great excitement, but they all share the same fear: has Tetsuro Tanno, the younger brother, been invited? Tetsuro (Tsurube Shōfukutei of Dear Doctor, Kabei: Our Mother 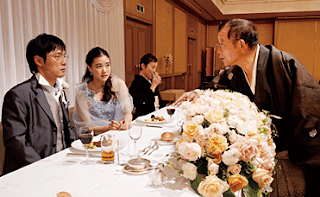 Tetsuro demonstrates why he's the black sheep of the family
Tetsuro does indeed make an uproarious appearance at Koharu’s wedding, once again bringing disgrace to the family. This event leads not only to further the estrangement of Tetsuro, but it also triggers a series of events that affect everyone connected to the family in varying ways. The interconnected web of family and neighbours in About Her Brother are reminiscent of an Ozu family drama. So too is the delicate balance of comedy and tragedy.

While the ‘Ototo’ may be the catalyst for the plot, equally important are the three generations of women who bind the family together through thick and thin. The elderly Kinuo resents having her opinions ignored by her daughter-in-law and granddaughter. Ginko, the pharmacist, supports the family both financially and emotionally. And the young Koharu is still in the process of discovering what she really wants for her life. 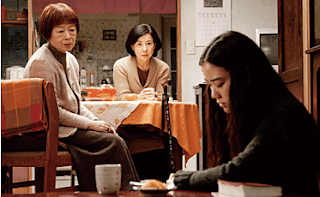 The three generations of women at the heart of the drama
I cannot comment on the cinematography of the film as an in-flight movie screen drastically alters the cinematographer’s intentions; however, I can say that I really enjoyed the use of Tsutenkaku Tower as a symbol in the film. Tokyo Tower has become almost a cliché in recent films and TV dramas set in Tokyo, so it was nice to see a different architectural structure getting some time in the spotlight. When Tetsuro falls ill, he can see Tsutenkaku Tower from his hospice room. This is significant not only as a symbol of Osaka, but also because of the tower’s association with Billiken, the symbol of good luck and happiness.
About Her Brother has an outstanding cast. Tsurube Shōfukutei as the younger brother had me alternately roaring with laughter and holding back the tears. Not only are the lead roles performed brilliantly, but the actors in smaller roles also shine. Standout performances include Ryō Kase (Letters from Iwo Jima

) as the older brother, and Takashi Sasano (one of my favourite character actors) as the neighbour Maruyama.

All in all, it is a stirring portrait of a complex family.  It is a bit of a mystery to me how the film has ended up as an in-flight movie without having received a wide release anywhere outside of Japan (except possibly Singapore).  Didn't anyone pick it up at the Berlinale in February when Yamada was there picking up his Berlinale Camera Award for lifetime achievement?  Odd.
Related Posts:

Ototo [Blu-ray]
Or for the hardcore fan: