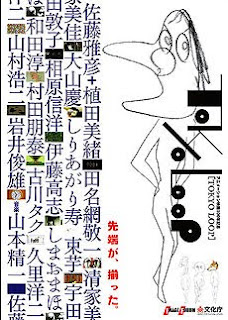 Tokyo’s centre for experimental and art cinema, Image Forum, under the guidance of program director Takashi Sawa and coordinator Koyo Yamashita, has a knack for putting together some clever screening packages together for the Image Forum Festival every year. Many of these packages, such as Thinking and Drawing, make their way into international festivals, and in some cases even onto DVD. Such is the case with the 2006 omnibus Tokyo Loop featuring the work of both established artists like Yoji Kuri, Taku Furukawa, Keiichi Tanaami, Nobuhiro Aihara, as well as exciting younger artists such as Kei Oyama, Mika Seike, Tabaimo, and Tomoyasu Murata.
Tokyo Loop came out of Image Forum’s desire to do something to celebrate the hundredth anniversary of Stuart Blackton’s animation “Humorous Phases of Funny Faces” (1906), considered by many the first publicly screened animated film. Sawa and Yamashita commandeered the help of Furukawa who contributed to the project with a film of his own and helped recruit other independent animation and experimental artists.
The 16 artists were asked to contribute a short film inspired by the city of Tokyo. The films would also be linked by the participation of Seiichi Yamamoto, a well-known musician from Osaka’s underground music scene who composed the score. Yamamoto corresponded with the artists during the production process. He composed the music in advance based upon the sketches and storyboards provided by each animator, then revised them to fit the final edit of the film. During a discussion that I attended following a screening of the film at Image Forum on the 12th January 2007, Yamamoto spoke of the difficulties posed by trying to compose the music in advance of seeing the films. In the end, he was very successful at using his music to complement the wide variety of styles and imagery that each artist brings to this collaborative process.
Masahiko Sato, renowned director of animated TV commercials, and his partner Mio Ueta kick off the omnibus with “Tokyo Strut,” an homage to the original line drawings of Blackton and also recalls the 2D experiments with line, shape, and motion done by Norman McLaren at the NFB. Sato and Ueta’s playful depiction of people and dogs out for a stroll reminds us of the advancement in technology since those early days of animation by shifting the image from 2D to 3D using CG animation at one point during the film.
“Tokyo Trip” takes us on a psychedelic ride through the colourful, trippy imagery that has made Keiichi Tanaami famous. While the nightmarish, often sexualized characters with exaggerated features are a trademark of Tanaami, he does weave in the theme of Tokyo subtly through his use of metaphors such as rain and train travel. 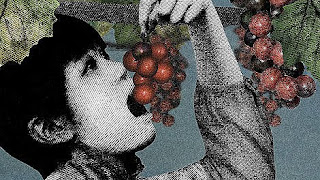 Tanaami’s work is followed by Mika Seike’s feminist parable “Fishing Vine” which depicts a woman as the object of male desire and voyeurism. Like her earlier films, two of which featured on the earlier Image Forum DVD Thinking and Drawing, “Fishing Vine” has been constructed through the scanning and laying of drawings, photographs, and real objects like leaves. Seike’s films are instantly identifiable by the black and white newspaper-like quality to the human figures.
Another artist also featured on Thinking and Drawing, Kei Oyama offers yet another disturbing but mesmerizing short film “Yuki-chan” about the death of a young girl. Yamamoto’s layered soundtrack complements the textured visual style of the animation and also conveys the somber tone.
The melancholy of Oyama’s work is countered by Kotobuki Shiriagari’s comical first foray into animation “Dog & Bone,” which keeps it simple with pencil drawings and cut-outs. The visual style is in keeping with the child-like scrawls he uses in his deeply subversive manga. A human line-drawing form with a cut-out dog head chases a spinning bone through various scenes from both contemporary Tokyo (Tokyo Tower, train crossing, movie theatre) as well as Tokyo’s past (rural scenes, fire bombings). The cheerful melody contrasts with the often violent imagery.
Tabaimo’s “Public Convenience”, which she also presented as a video installation at the Hara Gallery in 2006, takes place in a women’s public toilet. The setting is typical of the grungy public facilities generally found in JR stations. The colour palette and style is typical of Tabaimo’s work and is heavily influenced by ukiyo-e artist Katsushika Hokusai (1760-1849). A scene in which a turtle tries to crawl out of the Japanese-style toilet recalls Hokusai’s famous work The Great Wave off Kanagawa (Kanagawa Oki Nami Ura, 1832) in the way she draws the wave of water flushing the turtle back down. A fascinating piece that depicts the grim every day realities of public lavatories in the style of a moving painting.
Atsuko Uda won the newcomers prize at the Image Forum Festival in 1999 for her digital video film “Fukuda-san.” Her Tokyo Loop title "-blink-TOKYO-blink-" is creative nod to html script (the title is actually written with html brackets, but they were messing with with script on this page & had to be nixed). She was inspired by the city lights she remembers from her childhood growing up in the late Showa era. Her use of lights reminded me of the Lite-Brite toy that was all the rage in North America when I was growing up. Uda’s film captures all the motifs associated with the seasons with nods to traditional Japanese cloth and paper design. 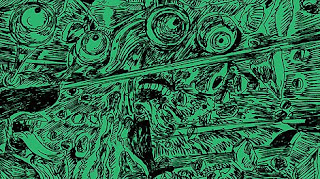 At first Nobuhiro Aihara’s “Black Fish” gives the impression that it is an abstract interpretation of the music like Norman McLaren and Evelyn Lambart’s Begone Dull Care (1949) or Oskar Fischinger’s Motion Paintings and early abstractions. However, as the piece progresses, the camera moves back to reveal that the black swathes of ink are not random, but animations of strange faces that metamorphosize into the moving images of black fish.
Renowned experimental filmmaker Takahashi Ito’s work is not traditional animation. Rather, it is animation in the sense of ‘manipulation of moving images’. “Unbalance” depicts a dark vision of Tokyo as a place where people suffer under intense emotional states. An intense film with nightmarish imagery.
Maho Shimao’s “Tokyo Girl” starkly contrasts Ito’s deeply anguished film with a more light-hearted vision of Tokyo as a place of female sexual freedom. Shimao is perhaps most famous for her manga “Goriko, High School Girl” which she wrote as a teenager and has a popular teenage girl fan following. She comes from an artistic family, with both her parents working as freelance photographers. Her father, Shinzo Shimao is also a novelist, and her grandfather Toshio Shimao (1917-1986) was a renowned writer.
With “Nuance”, Tomoyasu Murata captures the rhythms and imagery of the city using a variety of different animation techniques, many of which were reminiscent of Norman McLaren. Taku Furukawa and Yoji Kuri both demonstrated the minimalistic pen & ink styles for which they are renowned to capture typical Tokyo scenes with black humour. Furukawa’s “Hashimoto” features a group of smokers on Hashimoto JR platform who transform into crows to peck to pieces a ‘rat’ smoker who does not conform to the ways of the group. His sin? Talking on his keitai! Kuri’s “Funkogarashi” also takes on socially unacceptable, yet commonplace behaviour: people who walk their dogs and don’t scoop the poop. 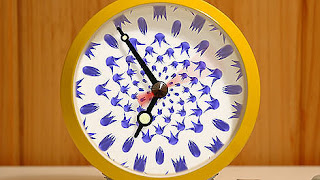 Many of the contributions to Tokyo Loop are abstract in nature. Atsushi Wada’s “Manipulated Man”, for example, presents a poetic dissection of the highly pressured salaryman using metaphors of manual manipulation, repetition, regurgitation and sheep. Koji Yamamura’s highly allusive, dream-like contribution “Fig” features a block-headed man with Tokyo Tower for a nose, while interactive media and installation artist Toshio Iwai plays with the concept of time flying by in the city by animating a clock with a series of images resembling a kaleidoscope in “12 O’Clock”.
The extras section of the DVD features ‘Making of’ profiles for ten of the artists. This gives a behind-the-scenes look at the wide range of techniques employed by the artists, from Aihara and Tanaami hand-drawing on paper and filming frame-by-frame on 16mm to Mika Seike scanning found objects into her computer for animation. The DVD comes with a book containing stills from each short film, bios for the artists as well as a short explanation of their inspiration for each piece. A CD of the soundtrack is also available.
For an interview with the producers, read this article from PingMag (an online bilingual art mag that I miss terribly since it succumbed to funding shortages at the New Year). Many of the artists featured here have their own homepages, so look for them in the sidebar.