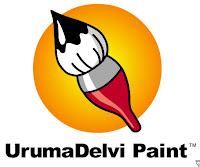 Uruma Delvi (うるまでるび) are a husband and wife team known for their distintive CG animation style. They have done a lot of educational shorts for the NHK including Kabuseru Samurai (The Capsule Samurai), a series which ran over the space of four years from 2003-2006. They have also tried their hand at more independently minded projects such as their 2003 contribution to Kihachiro Kawamoto's collective project Fuyu no Hi and their film Mr. Calpaccio (2005) which they sent to numerous festivals around the world including Annency, Animafest Zagreb, and Ottawa.
In the past year they have enjoyed phenominal success with their humorous Minna no Uta short Oshiri Kajiri Mushi (The Bottom-Biting Bug). The film features a dancing and singing bug who travels from the countryside to the city biting people's bums. Normally Minna no Uta shorts run on the network for about two months, but due to its popularity the short ran for five months and the song rose to number 6 on the Oricon charts. The popular little bug was then offered a show of his own entitled "Oshiri Kajiri Mushi to Odorou!"
I generally have a rather lukewarm response to straight CG animation (when it is all done onscreen and nothing has been prepared by hand), but I have recently been warming up to the work of Uruma Delvi. Their recent shorts about a little girl called Sumiko are really excellently done and I am working on a review of them for the near future. Today, however, I wanted to share with you a newsclip I found on Youtube of an interview with Uruma-san as he demonstrates Uruma Delvi Paint. This is an animation software that Uruma Delvi developed with researchers from Tokyo University. It looks very user friendly and I could imagine both children and adults having a lot of fun with it. To see a demo click here and for more information about the product click here. Apparently they hope to have a Beta version ready for public use soon.

Under the clip, I have also written up a filmography of the animated work Uruma Delvi have done so far. This does not include their work in illustration and games. They designed some kind of an animation game called Bikkuri Mouse for Playstation 2 with Toshio Iwai, but I haven't read any reviews of the product yet.