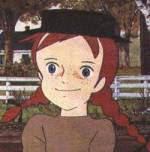 While doing some research totally unrelated to my interest in all things Japanese, I came across this wonderful CBC news clip from July 2002 covering a Japanese news crew doing a week-long special on Canada. The Japanese news crew are celebrating the 50th anniversary of the publication of Lucy Maud Montgomery's Anne of Green Gables in Japanese. The story goes that Canadian missionary Loretta Shaw, when forced to leave Japan at the outbreak of the Second World War, gave a copy of the novel to her student Hanako Muraoka. Muraoka was so delighted with the novel that she translated it and sought a publisher. The novel has been a sensation in Japan ever since.

What I love about this news item is how it demonstrates the contrast between the low-key CBC journalism style and the super-genki style of the Japanese presenters. Key iconography designed to delight the Japanese television viewer include the 'original' Green Gables house, breath-taking landscape views, kawaii costumes, and seafood.

I started a review of the Japanese anime series of Akage no An, back in November 2006, when I was living in Tokyo and was unable to watch the whole series at the time. I know it exists here in Germany so I keep my eyes open for it. With any luck, it will come back on TV just like Heidi did!