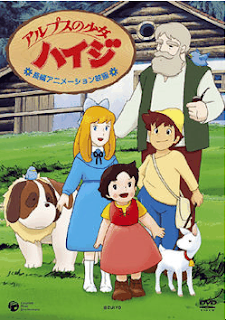 The best gift of the New Year here in Germany is that Heidi (アルプスの少女ハイジ, 1974,) is playing on Kika this season. I had toyed with getting the DVD box sets for my kids for Christmas, but as I knew it would be more of a present for me than for the kids I decided to wait. Now we can watch it together every evening after Franklin.

I have wanted to watch the series for a long time because it demonstrates the early talent of the creative minds behind Studio Ghibli: Isao Takahata and Hayao Miyazaki. Takahata directed the series for Zuiyo Eizo (which later became Nippon Animation) and Miyazaki is rumoured to have animated most of the opening sequence. It went on to become a sensation in every language in which it was broadcast. Strangely, it has never been released as a full series in English. I say ‘strangely’ because it would certainly make a profit. Ghibli fans would jump on the chance to see it, and even though it was produced in the 1970s, the colours are still brilliant and it would captivate young audiences in the English speaking world.

Part of the reason I want my children to watch the series is that there are not enough animation series for young children with strong female protagonists in them. My children, especially my daughter, love Dora the Explorer, a U.S. series designed to teach children Spanish. It is a great show for vocabulary building, but before too long they will outgrow the repetitive, didactic plot style. They are also fond of the English series Angelina Ballerina, which features the voice acting of Judi Dench’s daughter Finty Williams, but I must admit that Angelina’s constant whining tone gets on my nerves.

Heidi (the full Japanese title translates as Heidi, Girl of the Alps) presents a young girl who is hard-working and eternally optimistic. In each episode, she is presented with a daunting situation of some kind and through determination and resourcefulness she perseveres. Although the setting seems very idealistic, I can attest to the fact that the Swiss Alps really do look that pristine. The attention to detail in the mise-en-scene shows that the animators must have gone to the Alps to do sketching before the series began. There are, admittedly, some unrealistic touches such as Heidi not wearing a hat, coat and mittens in the winter, but I have seen much more outlandish representations of Europe in anime. I am trying to convince my husband that we should take a short holiday down to Maienfeld to see the Heididorf in person – I am curious not only with how it is portrayed in the anime but also to see how it has been packaged for the onslaught of Japanese tourists.

If watching with very young children, I would advise sitting with them as the climax of each episode can sometimes be a bit scary for them. It usually involves fear of some kind of danger. For example, in one episode Heidi’s pet bird Peep gets attacked by a bird of prey. In another, two of the goats are fighting and one almost falls to his death, but Heidi manages to rescue him. In the most recent episode two hunters almost freeze to death in the mountains because they fail to heed Grandfather’s warning. My son always sticks his fingers in his ears until the climax has passed and the episode returns to end on a cheery note with a glimpse of the episode to follow (52 episodes in all).

The most fascinating thing about the Heidi phenomenon in Europe is how a story originally written in German has been eclipsed in the public imagination by the Japanese animation of the tale. Colouring books and puzzles such as the one below, make no mention of the Japanese animators, but are clearly using it as their inspiration.

In this pre-1970s German edition of the novel, the cover illustration of Heidi showed the girl in a white blouse with a blue skirt and shawl. 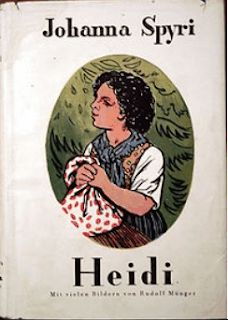 In the more recent editions of the novel, she’s usually wearing the iconic red dress popularized by the animation.

As the German dub of Heidi is so famous within Germany, I am curious to find out if a Swiss German dub was also done of the film. It would be a shame if Swiss kids were watching the series in High German instead of in their own dialect.

The German dub of Heidi is available for sale at amazon.de. There are two box sets containing 4 DVDs each. In Japan, they have released a box set commemorating the 35th anniversary of Heidi (which is strange because the 35th anniversary should be in 2009), available at amazon.co.jp. A movie spin-off was also produced in the late 1970s and was released on video in the U.S. as an English dub. I have found very little about this version of the film. The German amazon.de lists Heidi in den Bergen as a 90 minute film directed by Takahata, but it does not appear on imdb.com. I will keep my eyes open for a copy of the film and report back when I find it.

For your amusement, here is the original Japanese opening sequence:

And here is the German opening (warning, this is a very catchy tune and the yodels will be stuck in your head for the rest of the day!):