I made this great discovery this holiday season. The most recent edition of the Franco-Belgian comic book series Spirou + Fantasio, currently written by Jean-David Morvan and illustrated by José-Luis Munera, uses Tokyo (past and present) as its setting. In Germany it is book 47 of this comic that has been running since 1938, but for some reason in the original French series is is book 49. I am keeping my eyes wide open in book stores for the bonus episode 49Z which was done by guest manga-ka Hiroyuki Oshima. 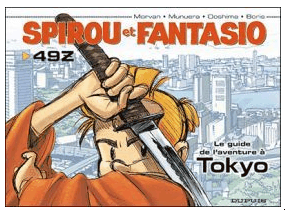 This comic book fascinates me for several reasons. First of all, for those of us saturated with manga and anime images of Japan, it is very refreshing to see Japan rendered via the pen of a European comic book artist. The characters, for example, are more in the style of Tintin and Asterix, with its black eyes and snub noses. A few minor characters did exhibit characteristics of the old buck teeth, slanty-eyes stereotypes, but on the whole I found it very well researched. The artist has clearly gone to Tokyo and used real locations and objects for the mise-en-scene. I particularly enjoyed the references to Japanese pop culture such as Naruto and Cowboy Bebop.

Great reading if you can get a hold of it in a language that you can read. As no English version of Spirou + Fantasio seems to be in print, here is a video preview of Spirou in Tokio to whet your appetite: