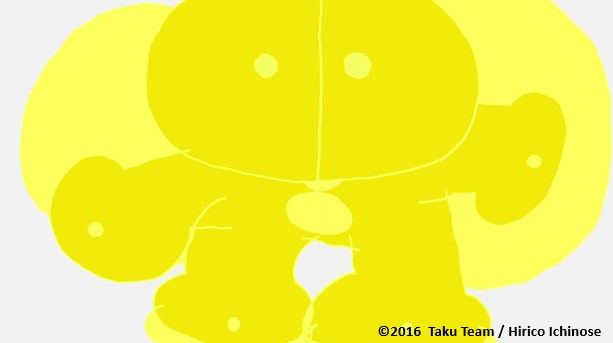 The theme of my selection at Nippon Connection this year was music. As most of my readership is outside of Germany, I know that many of you were disappointed not to be able to see the screening. Fortunately, most of this year’s selection can be found uploaded by the animators or the people who commissioned the animations on their official platforms. This is the first in my series highlighting this year’s selection. I will embed each video and give a little background about the artists involved.

Moving Colors from Decovocal on Vimeo.


The first work in the programme, Moving Colors, is a group project featuring the work of 12 animation creators (aka Taku Team). It is a tribute to the animator Taku Furukawa (古川タク, b. 1941) by young artists who were mentored by him at Tokyo Polytechnic University’s undergraduate animation programme. Each team member in this collaboration represents their favourite colour. The title design is by Furukawa himself. The team features: Takuma Hashitani (orange), Waboku (aka Wataru Nakajima, brown), Hakhyun Kim (purple) Yoshiyuki Kaneko (black), Shiho Morita (red), Moe Koyano (raspberry/turquoise), Yū Tamura (green), Yasuaki Honda (crimson), Yewon Kim (mint), Tomoyoshi Joko (blue) and Hiroco Ichinose (gold). The animations by the various creators were then edited together in a dynamic way by “Taku Team” with Tomoyoshi Joko of Decovocal as the creative director. The music is performed by Tomohiro Higashikinjō, Toyomi Kobayashi and Ryusaku Ikezawa.

I chose this piece for Nippon Connection 2018 because it is a celebration of music and motion – something central to the aesthetic of the artist it celebrates. Taku Furukawa is an independent animation pioneer in Japan. He was first mentored by the animation iconoclast Yōji Kuri (久里洋二, b.1928) in the early 1960s but then went on to international acclaim for his own independent shorts. I have reviewed many of his works over the years including: Phenakistiscope (驚き盤, 1975), Nice to See You (ナイス・トゥ・スィ・ユー, 1975), and Tyo Story (上京物語 / Jyōkyō Monogatari, 1999).

He is also well known in Japan for his prolific contributions to the long running Minna no Uta (みんなのうた / Everyone’s Song, 1961-present) series on the public broadcaster NHK. Since the passing of puppet animator Kihachirō Kawamoto, he has been the president of the Japanese Animation Association (JAA). He is known for collaborating with other artists such as his projects with the collective G9+1 and his prolific series of short shorts (chōtanpen / 超短編) with the composer Jun Sakurai (桜井順, b.1934) called One Phrase Theatre / ヒトコト劇場 (You Tube Playlist).

There is no story in this piece, rather the overarching theme of “colour” (the title uses the American spelling, which is taught in Japan. This blog is written in Canadian English). Each of the animators (they call themselves “creators” in their explanatory notes) made a short inspired by the music and their selected colour. If you are familiar with the work of these artists (I believe they have all had works screened at Nippon Connection over the years), you will be able to recognise their distinctive artistic styles immediately. As a visual guide, I have taken some screencaps from the credits to act as your guide: 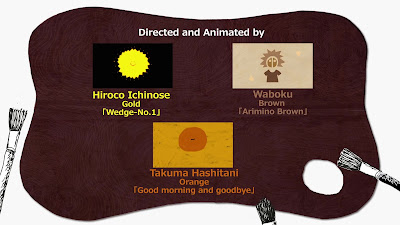 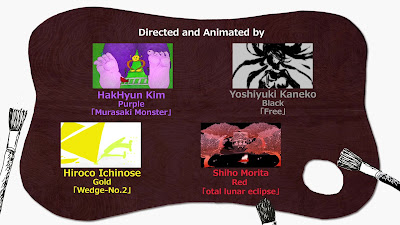 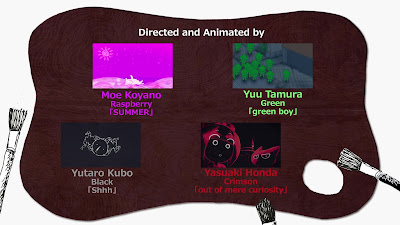 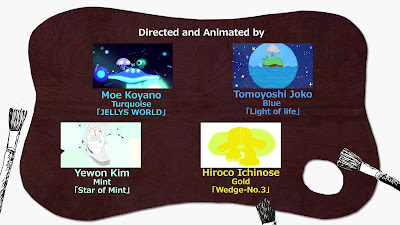