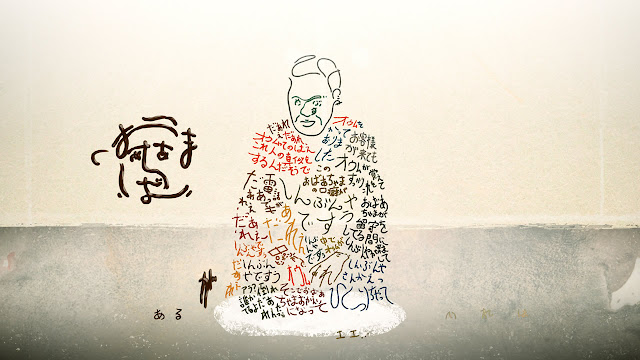 Who’s there?  (だぁれぇ/ Dārē, 2016) by Kōjirō Inoue (井上幸次郎) was the opening film of Hiromitsu Murakami’s selection of Tokyo University of the Arts’ (Geidai) recent works at this year’s Nippon Connection.  It was one of the best films on the programme and clocks in as the shortest with a runtime of only 1’25”.   In fact, my only criticism of the film was that it was a tad too short because I was enjoying it so much.

The shortness of the film and its comedic nature are due to the fact that it is Inoue’s first year work for Geidai’s graduate programme in animation.  As assistant professor Murakami explained during the Q+A at the Nippon Connection screening, students have only 6 months to complete their first year film and a whole year to complete their second year film.  This results in many students experimenting with playful or comedic styles in the first year and creating more serious works for their graduate film.

Inoue’s short short is an adaptation of a classic rakugo story, “The Parrot” (オウム/Oumu).  The story varies according to the rakugo performer’s interpretation.  For this animation, it is performed by Kintarō (金太郎, b. 1956), a master rakugo performer from Yamagata Prefecture.

Rakugo (落語) is a comic storytelling tradition that dates back at least to the 18th century.  A lone storyteller, or rakugoka (落語家) sits on a stage (kōza / 高座) that is empty but for a zabuton (座布団 / floor cushion) wear the performer sits.   Apart from word and gesture, the performer may use a paper fan (sensu / 扇子) or a small cloth (tenugui / 手拭) as props.  The comic tale features two or more characters which the rakugoka differentiates through his pitch, tone, and by turning his the head.

Rakugo literally translates “fallen words”, which is exactly how Inoue depicts it in his animation.  The rakugo storyteller is made up of an assortment of kana and kanji that appear in the story and as he tells the story, the words fall from his mouth into piles on his left and right sides.  By the end of Kintarō’s tale, the piles transform into the two central protagonists of his story: the elderly woman who owns the parrot and the paper delivery boy who interacts with the parrot.  They bow their acknowledgement to the audience.

The film captures the spirit of Norman McLaren in the way that it uses one animation technique to express a complete story and a complex art form (rakugo) in a very short amount of time.  The well told story and film’s visual appeal are complemented by traditional Japanese music (shamisen and percussion) arranged by Yae Yamaguchi and sound design by Tomoya Matsuda.  The title "Dārē" (Who's there?) is a repeated refrain central to the joke in the story.

Check out Kōjirō Inoue’s official website to learn more about this up and coming young artist.  For a short interview and behind the scenes images of the making of this film, click here.  I am excited to see what he does for his graduation project.