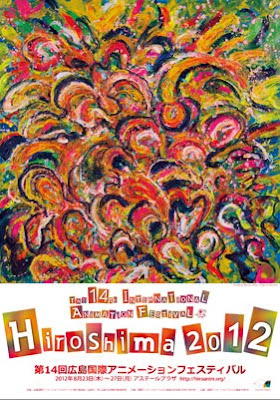 The biannual Hiroshima InternationalAnimation Festival 2012 came to a conclusion today.  The final competition consisted of 66 works selected from 2,110 entries from around the world.  The international jury included Aleksandra Korejwo (Poland), Igor Kovalyov (USA), Irina Margolina (Russia), Kosei Ono (Japan), and Marv Newland (Canada) – whose classic film Bambi Meets Godzilla (1969) was screened on 16mm at my 10th birthday party and had a profound effect on me ;)  The international honorary president of the festival was Peter Lord of Aardman. A selection of Lord’s works were also screened at the festival.

The winners are as follows:

Read more about the winning films at the official website for Hiroshima 2012.

Seven works by Japanese artists made the official competition:

In addition to the competition, this year’s festival celebrated the 30th anniversary of ASIFA-JAPAN, which was founded by the co-founders of the Hiroshima festival – the current ASIFA president Sayoko Kinoshita and her late husband Renzo Kinoshita (read more about them).  The ASIFA-JAPAN 30th Anniversary Special Program celebrated the works of its members through screenings of their animated works and an exhibition of objects related to their works including puppets, paintings, books, and installations.

I was deeply disappointed not to be able to attend the festival this year as there were many special presentations I would have loved to have seen: a Jiří Trnka Special Program to celebrate the 100th anniversary of his birth; an homage to the late Nobuhiro Aihara (see poster for this year's festival), whose works are so rarely screened outside of Japan; and a focus on animation from Norway.  There was also an omnibus presentation of the best in recent world animation, a special on contemporary Japanese animation, a program for children, and a program on works by students.  In a nod to the founding ethos of the festival, a selection of peace-themed films were also screened dedicated to “the spirit and the heart of Hiroshima.”