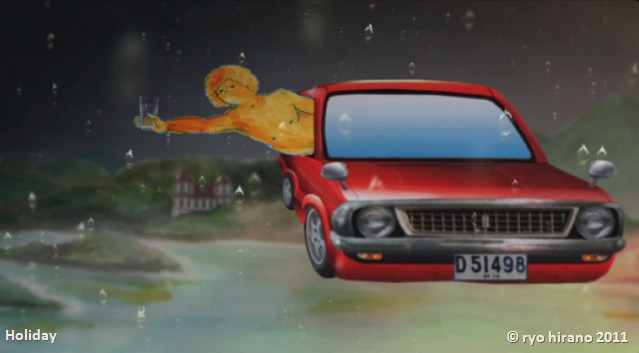 Holiday (ホリデイ, 2011) is Ryo Hirano’s graduate film from Tama University of Art and the theme is one that he has explored before: love and the body.  Hirano has said that the concept was based on memories of the summer holidays (source: public-image.org) – and if you’ve ever experienced a swelteringly hot summer in central Japan you will understand how it might inspire a trippy, fantastical such as this one.

The film opens with an iris shot of a romantic lakeside resort with multicoloured gondolas quietly passing over the stretch of water.  It is as if we are viewing the scene through a telescope.  The idyllic scene abruptly ends with the next cut as we are suddenly confronted with an imori (an akahara imori / Japanese fire belly newt to be precise) stuck in a pipe.  The stuggle of the imori is in stark contrast to the idyllic sound of piano playing.  A rush of water sends the imori flying out of the tap and into a young woman’s drinking glass.  The woman drinks as she walks across the room and we see that she is in a Japanese room with tatami floor and the sliding doors wide open to reveal the lush landscape rising from the lake.  A naked man painted gold plays a miniature piano on his lap.  The girl chokes on the imori and falls to the floor, the idyll of the scene interrupted as she crawls to the toilet to throw up.  The imori walks out of the bathroom covered in puke – as he wipes it off himself we are treated to the revolting inducing image of a three-dimensional, realistic looking sick pile hitting a drawn tatami floor.  The girl lies prone on the floor as the gold man tries to help her recover and the imori beg her forgiveness by bowing.

The next scene really does say Japanese summer holiday: the imori in a hotel yukata stands smoking under a tree in front of the Lake View Hotel with a glorious view of the lake marred by a road cutting right through it.  Typical.  The naked gold man pulls up in a red car with the girl looking ill, but somewhat recovered and they take the imori on a journey with them.  The unlikely threesome put on a concert in a band shell in the forest.  Their only spectator is a naked, well-endowed cat who philosophizes about love.  The girl coughs until she collapses on stage and metamorphoses into an ear.  The imori – possibly enraged with guilt – attacks the cat.  The cat made me think of Kenji Miyazawa, but I do not know it this was Hirano’s intention.

Back in the Japanese hotel room, the ear sits on the table as the gold man cries.  He comes up with the ingenious idea of descending the imori into the ear by tying a rope to his tail.   At first, this seems to go well, until the imori gets stuck and the gold man rips off his tail in a futile effort to pull him out.  The imagery from here on out gets more and more dreamlike with piano music played from the ear like a radio, the girl running in the dark and crying, the red car floating in the air and rain falling in slow motion, and lovely landscapes.  It is a strange tale of love and loss blurred together like hazy memories of a lakeside holiday during Obon.

While working on this animation, Hirano saw a woman interviewed on TV who was upset by the suicide of the Korean actor and singer Park Yong-ha (1977-2010).  Through her tears, the woman said that the rain that fell that day was the rain of Park Yong-ha. (source: public-image.org)  This notion of a deceased person being turned into rain made a strong impression on Hirano and he incorporated it into this unusual animated tale of love and friendship between a man, a woman, and an imori.