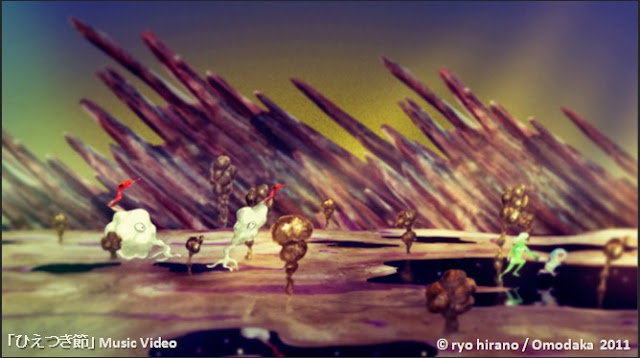 With so many young animators coming out of art colleges these days, it is only those who have a truly unique vision or aesthetic that stand out from the crowd.  Ryō Hirano (ひらのりょう,  b.1988) is fast becoming known at home and abroad for his weirdly wonderful animated shorts.  Born in 1988 in Kasukabe, Saitama, Hirano is a graduate of the Information Design programme at Tama Art University and he is managed by Foghorn.

In 2009, Hirano was one of a group of students selected to participate in the creation of the collaborative  project “music video orchestra” for the experimental collaborative group Omodaka at the 13th Japan Media Arts Festival.  Last year, he won the Japan Media Arts Festival “New Face Award” for his animated music video for Omodaka’s latest song “Hietsuki Bushi”.    He has also recently done a music video for OvertheDogs, a young band also represented by Foghorn.

According to Yuki Harada’s interview with Hirano last year, Hirano began experimenting with animation during the summer holidays of his first year of university.  He took courses in photography and programming at Tamabi, but felt that he didn’t really excel in those areas.  He also picked up basic training in the use of animation software while at Tamabi (source: public-image.org).  The first film Hirano ever made was an amusing short-short called “Udara Udara” which features cute little hand-drawn creatures on photographs of natural habitats.  He did the sound for this film himself (read review and watch video). 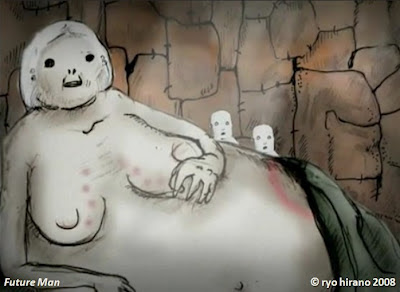 His next film was Future Man which he made as a project for a university course where they were asked to make something about living beings.  In preparation for this film, he read up on ant ecology and used this knowledge as the basis of his film.  One of the details that struck him as remarkable was that scientists who study ants found that their behaviour is not driven by sympathy or love for the ant queen but that it is the evolutionary drive to maximize one’s DNA.    In Future Man, he substitutes humans for the ants.  The many drawings that he did resulted in a 7 minute animation, which gave him a great feeling of accomplishment (read review and watch video).

His third work was Midnight Zoo.  It was based on a dream he had had where he was sucked into a zoo.  In this animation, Hirano wanted to show the connection between humans and animals.  Hirano is drawn to the grotesque (guro) tradition of art in Japan and elsewhere.  The manga of Hideshi Hino has been a major influence on him.  In his interview with Harada, Hirano states that he has always been drawn to the fantastic and the grotesque. Other major artistic influences that he cites are the manga-ka Shigeru Mizuki of GeGeGe no Kitaro fame, the independent animation of Igor Kovalyov, and Garo (ガロ) manga.

Themes that interest Hirano are the transformation of the body – which is perhaps why he is drawn to the grotesque and to yōkai (supernatural creatures).  He has said that he is “interested in the fact that even if you change the body, the essence doesn’t change” and this is a theme that he explores in his works.  Another theme is “boy meets girl” love.  He has tried to express this type of romantic feeling in both Midnight Zoo and Holiday.

Interestingly, Hirano says that he wants to make things that are sugoku guroi (super-grotesque), but that it is sometimes difficult not to overdo it.  In his desire not to overdo the grotesque elements in his work, the result  often turns out more cute than grotesque. When I read this I immediately thought of Hirano’s The Kappa’s Arms which is quite grotesque – I mean a kappa has his arms torn out and bleeds all over the place – but remains quite a cute animation on the whole.

In terms of method, Hirano tends to plan just the first and last scene in his animated shorts and the in-between part just comes naturally.  As a result of this relaxed approach, things that he experiences in his everyday life during the production process often get reflected in the finished film.  For example, The Kappa’s Arms was impacted by the death of a friend during the animation process (read review and watch film).  His work is also heavily influenced by what he reads.  The Kappa’s Arms was initially based on a kappa folktale Hirano discovered in a book, and Ichigwankoku (One-Eyed Country) was based on an old rakugo tale (read review). 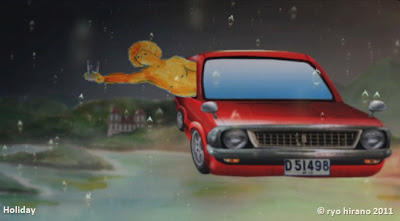 Hirano’s animation has a unique look because of his use of collage.  Drawn elements are mixed with photographed images and sometimes even real objects.  He apparently prefers watching documentaries to watching animation but as an artist prefers animation to live action because he can control the final results more.  Also, with animation the audience is much more willing to go on a journey into the fantastic.  In a way, animation is Hirano’s jibun no documentary – a documentary of his inner self.  He can express what he wants to say without any uneasy feeling (iwakan).

We showed Ryo Hirano’s film Holiday at Nippon Connection this year.  It is his graduate film from Tamabi and the themes are once again love and the body.  He made the film based upon memories of the summer holidays (read review and watch trailer).  Holiday has raised Hirano’s profile as an animator as the film has been picked up by many international festivals.  In order to make a living, he continues to do commercial work such as music videos and the Space Showa TV station ID.   I hope that he finds the funding to continue making indie fare because he shows a lot of promise as an artist.

A great deal of the information for this article was gleaned from an interview with Hirano by Yuki Harada (source: public-image.org) and through correspondence with Hirano himself.  To read more click on hyperlinked the titles below.