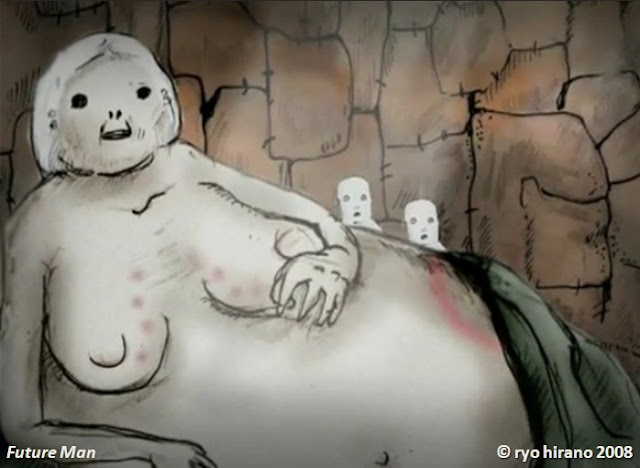 Future Man (蟻人間物語/Ari Ningen Monogatari, 2008) is Ryo Hirano’s second animated short.  The Japanese title literally translates as “Ant-Human Story”.  While a student at Tama Art University, his class was assigned a project in which they should make something about living beings.    In preparation for this film, he read up on ant ecology and used this knowledge as the basis of his film.  According to Yuki Harada’s interview with Hirano on his website Public Image last summer, one of the details that struck Hirano as being remarkable was that scientists who study ants found that their behaviour is not driven by sympathy or love for the ant queen but that it is the drive to maximize one’s DNA.   My biologist husband tells me that this is the evolutionary theory that Richard Dawkins famously put forward in his book The Selfish Gene

In Future Man, Hirano substitutes humans for the ants.  Naked male figures with Frankenstein-esque square-shaped heads gather supplies for the colony to the strains of Strauss’s The Blue Danube.  They need to defend their food stores from himizu (Japanese Shrew Moles) whom they also kill and consume.  Inside the colony, Hirano depicts drones caring for infants, and small children fighting over himizu meat like dogs.  At the centre of it all is the corpulent body of the queen ant-human who smiles benevolently at her drones.

The tranquil scene takes a dramatic shift when a monster with sharp teeth at the end of long tentacles attacks the colony.  The drones react in a panic, but the queen ant-human remains tranquil until she is directly attacked.   At the end of the film, the colony lays in ruins, with bodies strewn everywhere.  The only glimmer of hope is an infant who crawls into a beam of sunshine and stares up at birds flying in a peaceful blue sky.  The image then expands upwards out of the colony all the way into the universe where decaying relics of satellites and spaceship circle the planet earth.  If one looks at the planet earth from outer space, the human race is really not so unlike a colony of ants.  Although we do fancy ourselves the greatest species on the planet, we are really just small specks of dust in the vastness of the universe.

Watch the film for yourself:

Learn more about Ryo Hirano on his official website.

Posted by Cathy Munroe Hotes at 1:01 am