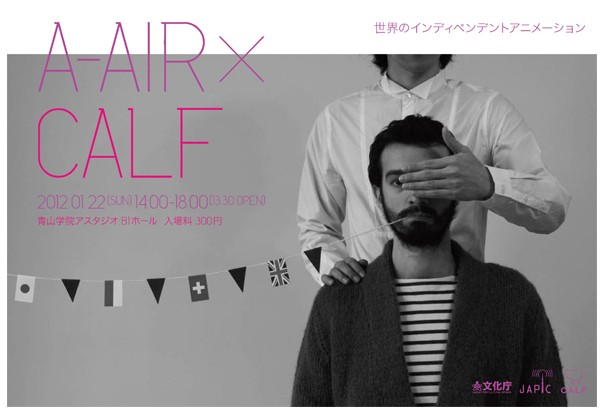 The Japan Image Council (JAPIC) has sponsored  three animation artists for a 75 days of residency in Tokyo for from December 2011 until March 2012.  The Animation Artists in Residence (A-AIR) include Ewa Borysewicz (エヴァ・ボリセヴィッチ) from Poland, Immanuel Wagner (イマニュエル・ワーグナー) from Switzerland, and London-based filmmaker and animator Mikey Please (マイキー・プリーズ).  On the 22nd of January, JAPIC will be joining forces with the Japanese independent animation label CALF to celebrate the coming together of talented young animation artists from around the world.

With discussion moderated by animation scholar and critic Nobuaki Doi


Born in 1985, Ewa Borysewicz grew up in Podlachia, Poland. In 2009 she graduated from Kracow Academy of Fine Arts. Her graduation animated film “Who would have thought?” has been acclaimed both by audiences and critics alike.  She has received important festival awards in Poland and abroad. She’s working now on her debut animated film. She’s also a graphic artist and illustrator.

イマニュエル・ワーグナー Immanuel WAGNER（スイス）
Born in 1984, Immanuel Wagner was raised in Switzerland. After studying for 3 semesters of Fine Arts at the Lucerne University of Applied Sciences and Arts (HSLU), he graduated from their animation programme in 2010. His graduation film has been shown in over 20 International Short Film Festivals and has also won 2nd Prize at Animator Festival in Poznan, Poland. He is currently working as a freelancer working on several Swiss commercial and non-profit art projects. http://imma.tv/


マイキー・プリーズ Mikey PLEASE（イギリス）
Born in 1984. Mikey Please graduated with a BA in Special Effects from the University of Arts London (UAL) and then went on to direct animated promotional material for Virgin, Transgressive Records, Rough Trade, Ninja Tune and Universal Records before doing an MA in Direction at the Royal College of Art. He is now represented commercially by Agile Films, Independent Talent and developing long form projects with Warp Films for 2012.  http://mikeyplease.co.uk/

Learn more about the Animation in Residence programme at the JAPIC website.

The full Japanese programme is also on the JAPIC website including a map to the event.
RSVP to the Facebook Invite here.
CALF(info@calf.jp) JAPIC(03-6670-5676)

Immanuel Wagner's artwork has been used for the cover of Christian Gasser's new book about Swiss animation:

Posted by Cathy Munroe Hotes at 7:06 am