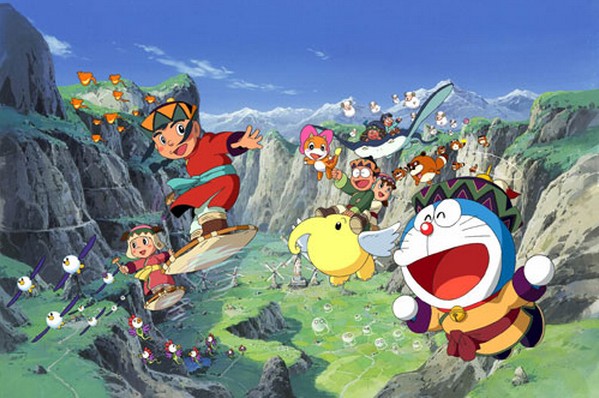 Tsutomu Shibayama (芝山努, b. 1941) admits that he is patting himself on the back by listing his own films in the Animation Top 20 questionnaire that he filled out at the Laputa Animaton Festival in 2003.  He uses the expression “temae miso” (手前味噌) – which literally means “home-made miso” but is colloquially used to express that one is singing one’s own’s praises.  Shibayama’s entire list but two are all movies from the popular Doraemon franchise which Shibayama has been involved with since the 1970s.

Despite his long history as an animator and director in the anime industry, Shibayama writes that he does not feel that he is particularly discerning when it comes to the quality of animation and doesn’t really feel that he is suited to the task of ranking animation.

Paul Grimault’s The Shepherdess and the Chimneysweep (1953) – which later became the basis of his Grimault’s feature film masterpiece The King and the Mockingbird (1980)  – was the film that inspired Shibayama to become an animator himself.  Before this film, Shibayama had only seen Disney animation for children and the contrast between Grimault’s work and that of Disney made a great impression on him.

Frédéric Back’s The Man Who Planted Trees was so highly recommended to Shibayama by a friends that he finally “lifted his heavy bottom” and went to see it and it did impress him very much.

The rest of Shibayama’s list ranks what he feels are the best Doraemon feature films.  I did not have the impression that Shibayama was listing his own series out of mere egotism, but more out of a place of being proud of the work that he has done.  Some animators who work for big franchises grow weary of the limitations they set upon creativity.  It is nice to see someone who seems to truly enjoy what he does, even after all these years.

7.
Doraemon: Nobita and the Legend of the Sun King
(ドラえもん のび太の太陽王伝説, Tsutomu Shibayama, 2000)

The Doraemon films are available via cdjapan: