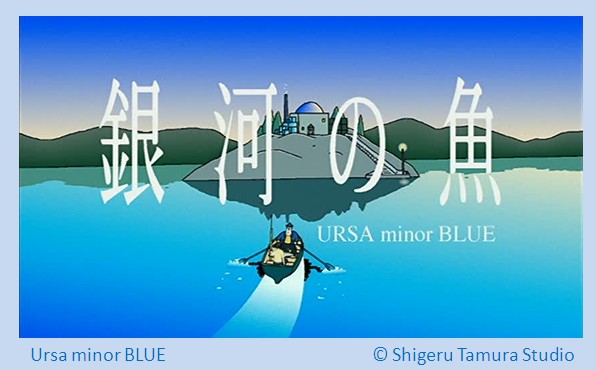 Shigeru Tamura’s animated short URSA minor BLUE (銀河の魚/Ginga no Sakana, 1993) begins with a simple scene that could be right out of an Ernest Hemingway novel: a grandfather fishing with his grandson. The grandson, Yuri, is quite able with the hand-thrown harpoon and he soon catches an impressive fish for their supper.  As they return home with their catch, Teshikai Utollo’s otherworldly music hints that all in this world may not be the same as in ours. The grandfather sends Yuri to find tomatoes for dinner and we discover that they have an indoor rain forest complete with a lemur-like creature whose eyes shine like headlights. The tomatoes that Yuri picks seem to pulsate with a strange light.
While the grandfather comically burns their dinner, Yuri ascends to the observatory above their home. Looking through an unusual telescope he discovers that the constellation of Ursa Minor appears to be missing a star. The pair set off in their rowboat again to try to find out what is going on. They pass through a talking forest and a rocky area with mythical flying beasts. Along the way, a walking and talking building approaches them and voices his concern that stars seem to be missing from the Milky Way. They reassure him that they are going to investigate and return the Milky Way to its original state.

As they head out over what appears to be open sea, Tamura (たむら しげる, b. 1949) shifts to an overhead perspective and we then realize that Yuri and his grandfather do not live in our world but rather above it. The sea that they are rowing across is the atmosphere and they are able to look down at a world that resembles ours. As they journey out into the universe, they witness a giant fish unlike any they have ever seen.  They come to a place where giants who seem hewn from rock appear to be forging stars on giant anvils and are greeted by the wizard who lives there. They soon learn that a giant fish has been eating the stars and the wizard presents Yuri with a magic harpoon and sends him on a mission to try to catch the fish in order to return the Milky Way to its normal state. Hence the Japanese title Ginga no Sakana, or Fish of the Milky Way.
The grandfather also refers to the Milky Way by its colloquial name Ama no gawa (天の川), or River of the Heavens, which suggested to me that Tamura was influenced by mythology in his creation of his fabulous world. In East Asian mythology it is said that the Milky Way resembles a kind of silvery river and mythological stories developed around this impression. The most famous is that of the stars Vega and Altair, who were said to be lovers (named Orihime and Hikoboshi in Japanese) separated by the Milky Way who could only meet once a year on the seventh day of the seventh month – a day celebrated in many parts of Japan as Tanabata (七夕/the evening of the seventh). The mythology surrounding the Milky Way has inspired much great literature – most famously Kenji Miyazawa’s Night of the Milky Way Railroad

, which Tamura references by having a train pass under Yuri and his grandfather as they row across the sky.
(Learn more about Anime Adaptations of Kenji Miyazawa)

As the English title suggests, colour is an important element of Tamura’s work. The predominant colour in this film is blue, but there are also wonderful scenes of green and orange when they visit the wizard. This style of filling the screen with bold colours is characteristic of Tamura’s aesthetic. His manner of completely filling the screen with colour reminded me of two younger animators: Tomoyoshi Joko – who also made a wonderful little film involving anthropomorphic buildings called simply Buildings (2008) – and Oscar winner Kunio Katō.  .  .  although Katō uses a more muted palette to fill the screen than the cheerful colours of Shigeru Tamura.
URSA minor BLUE won the Noburo Ofuji Award in 1993 and is available on DVD. The DVD extras include a music section where Teshiaki Utollo explains the motivations behind his expressive soundtrack, an illustration gallery, storyboards, layouts, interviews about the production with Tamura, Utollo, and producer Mitsuo Shionaga, and trailers for Tamura’s other animated works a piece of PHANTASMAGORIA (1995) and Glassy Ocean (1998). The soundtrack for URSA minor BLUE can also be purchased separately.  Check out more of Tamura's illustrations on his official homepage.