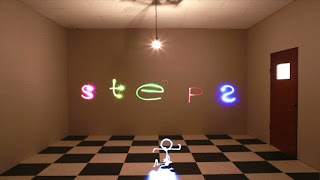 The animation team Tochka (Takeshi Nagata and Kazue Monno) are famous for their PiKA PiKA or “lightning doodle” animation technique. In the course of their career they have actually practiced a wide range of stop motion animation techniques. In my review of their CALF DVD Tochka Works 2001-2010, I pointed out that the “Jumping” section of their film PiKA PiKA in Yamagata (2008) uses a pixilation technique similar to that used in Norman McLaren’s Neighbours (1952). It was with great delight that I discovered during the CALF Animation Special at Nippon Connection that Tochka was continuing to experiment with this technique.
Pixilation, a term attributed to NFB animator Grant Munro, is a technique in which live actors are animated frame-by-frame together with inanimate objects. Takeshi Nagata told me that for Steps (2010), they took their inspiration from the Norman McLaren and Claude Jutra film A Chairy Tale (1957) in which Jutra has an encounter with a chair that refuses to be sat upon.
In Steps, we are presented with an empty room with a checkerboard floor pattern and a lone bulb hanging from a cord on the ceiling. Slabs in the formation of steps slide out of the walls, through the room, and back out the opposite wall. The opening sequence ends with the door opening, the steps sliding in with PiKA PiKA lights spelling out the title in the air and a PiKA PiKA stick figure running through the frame.
A salaryman sleeping in his pajamas slides in through the open door and is soon resting on a bed of slabs, with his clothes on a rack nearby. The PiKA PiKA stick figure jumps on his face and soon the man and the stick figure are engaged in a slap stick routine in which the man’s clothes slide out of his reach, and the stick figure taunts him and they fight with each other.
In the next scene, the man returns, as if from work, into the empty room. The PiKA PiKA stick figure slides in slabs and shapes them into steps that the man climbs until he has to duck his head because he is too close to the ceiling. The stick figure first tries to knock him down, then shoves the man – still atop a pile of slabs – out the door.
Tochka’s Steps not only borrows the A Chairy Tale’s pixilation technique but also matches it in its playfulness and innovative design. There are some key differences between the films. In A Chairy Tale, the chair itself was given human attributes: provoking Jutra then later trying to win his affection back again. In Steps, the interplay is between the actor and an animated human stick figure drawn in the air with light. The inanimate objects such as the coat rack and the steps do not acquire any human attributes. Instead, it is suggested that their movement is manipulated by the playful, scalawag PiKA PiKA figure.
Another big difference is that in A Chairy Tale, the way in which the chair has been animated remains invisible to the naked eye. No matter how much the viewer strains to see if there are strings attached to the chair, the illusion of movement is so complete that it really does appear as if the chair has indeed come to life and is moving of its own volition.
Not so in Steps, where the careful spectator can see the ghostly black figures of the animators in some of the frames. This is characteristic of the PiKA PiKA films, which seek to demystify the art of stop motion animation. It’s a postmodern twist on the NFB style pixilation in which it is not just about the illusion of movement but about our awareness of the hand of the animator(s) in the making of a stop motion film.

This added dimension would have been much clearer in the original presentation of the film which was as part of a video installation.  Exhibition visitors would have watched the film standing in the same room and looking through peep holes on the wall.  See Tochka's Flickr stream to get an idea of the exhibition space at Aichi Triennale 2010.


A brilliant little film, which makes me excited to see what new projects Tochka have up their sleeves. To learn more about Tochka and their PiKA PiKA workshops read about my observations of their Nippon Connection workshop in Frankfurt. The Tochka Works 2001-2010 DVD can be purchased from CALF or within Europe via BAA.
© Catherine Munroe Hotes 2011