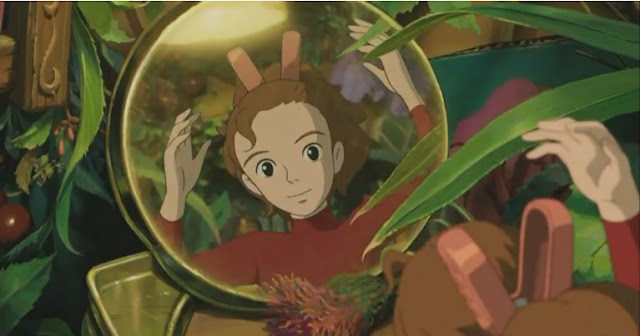 Some Japanese friends took pity on me not being able to see the latest Studio Ghibli film The Borrowers Arrietty (借りぐらしのアリエッティ/ Karigurashi no Arietti, Hiromasa Yonebayashi, 2010) at the cinema yet by sending me the film tie-in book Karigurashi no Arietti: Roman Arubamu (2010). It is just jam-packed with information about the making of the film – which is, of course, an adaptation of Mary Norton’s classic children’s novel series The Borrowers. The first few chapters are a kind of storyboard of the film using full colour stills. The opening sequence reminds me of the opening sequences of My Neighbour Totoro and Spirited Away, with a young child (in this case a 12-year-old sickly boy called Sho) being driven from the city into the countryside. Like other Ghibli films, the natural world is an important part of the story and setting.

This is followed by an overview of the cast of characters. There are the “tiny people” who live under the floorboards of the house in which Sho’s mother grew up. Red-haired Arietty is the spunky 14-year-old main protagonist. Other “tiny people” include her father Pod, her mother Homily, and a young boy called Spiller. Sho has been brought to this house to recuperate from an illness by his great-aunt Sadako. Rounding off the cast of central characters is Sadako’s housekeeper Haru. Also among the “supporting cast” are a fat cat – who we have seen before in Ghibli films like Whisper of the Heart – and a crow. And of course, it wouldn’t be a Japanese anime without some reference to bugs – the book delightfully gives supporting cast status to some crickets, a ladybug, a cockroach, a pill-bug, and some ants.

The book also gives in-depth profiles to the voice actors, the director, the producer, and other behind-the-scenes staff. Yonebayashi ((米林 宏昌, b. 1973) is the youngest person to helm a Ghibli film. He has been working at Ghibli for over a decade doing inbetweening on films from Princess Mononoke to My Neighbours the Yamadas and doing key animation on recent films like Tales from Earthsea and Ponyo.


Karigurashi no Arrietty - Teaser
The story behind the woman who performs the theme song is quite fascinating. Cécile Corbel is a celtic harpist and singer from Brittany,  the westernmost region of France. She apparently sent a fan letter to the studio with a CD of her music and they liked what they heard and invited her to collaborate on the music for this film. It may have also helped that she has long ginger hair, just like Arietty.

The book is full of wonderful little extras to delight fans – like maps of the house and surrounding gardens, artists’ sketches done during production, samples from the original storyboards – and my favourite: a photograph of a 30 kg replica of the dollhouse in the film that apparently went on tour with the promotional roadshow of the film. Sitting at the desk in the study of the dollhouse is a miniature bearded figure of Hayao Miyazaki. Too funny!


© Catherine Munroe Hotes 2010
The book can be purchased for a reasonable price via cdjapan:


Related Posts:
Whisper of the Heart
My Neighbour Totoro
My Neighbours the Yamadas
Tales from Earthsea

Posted by Cathy Munroe Hotes at 12:04 am