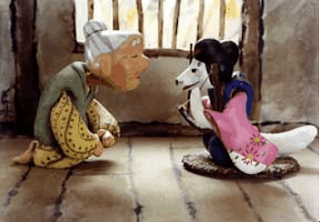 Foxes appear often in Japanese folklore in a wide variety of guises. They are usually quite clever and in the possession of magical abilities. Tadanari Okamoto’s award-winning puppet animation The Magic Ballad (Okon Jyoururi, 1982) was adapted from a folktale by Akira Saneto (current book cover below). By the early 1980s, Okamoto had made numerous widely respected puppet animations, but this was his first time using puppets made using techniques from the hariko (papier-mâché) and doro-ningyo (clay dolls) styles that were common where he grew up in Osaka. In contrast to his earlier puppets, the ones in this film have a smoother, shinier surface much like that of inuhariko (papier-mâché dogs) and daruma dolls. Flashbacks within the narrative are indicated through the use of ink on paper cel animation. 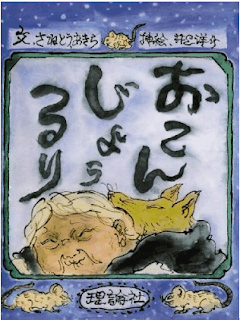 The 26 minute film tells the tale of an ailing elderly woman named Itako who encounters a fox named Okon. The name ‘Itako’ is not arbitrary. Traditionally in northern Japan, girls that were born blind usually trained to become ‘Itako’ – a kind of a female shaman or spiritualist who would earn their living offering spiritual advice at Buddhist temples. The northern location of the story is emphasized through the dialect spoken by the puppets.
The story opens with Itako lying bedridden, as she has for a long time. Okon enters her home and Itako tells the fox that he is welcome to take anything that he wants, for she has no use for anything anymore. Okon is delighted and in order to return the favour (the act of ongaeshi), Okon performs a magic jyōruri (a ballad with shamisen accompaniment) that heals Itako so that she is fit enough to walk again. Everyone is surprised by Itako’s sudden recovery. She then hears of a hunter who has been badly injured and is near death. Itako hides Okon in the back of her shirt and has the fox sing the song while she plays shamisen in order to heal the man. This act of kindness is repeated for others until Itako’s good fortune leads some to be suspicious of her. Their ill will leads to the tragic climax of the story. 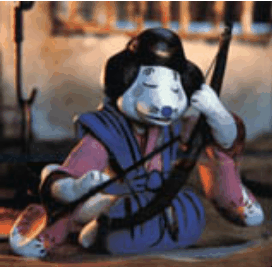 The Magic Ballad is a truly remarkable short film. The dolls are beautifully formed (click here to see photographs of the puppets which are in the collection of the National Film Center) and marvelously expressive. The voice acting and musical performances elevate the film to its status as perhaps one of Okamoto’s most impressive works. Mami Soga’s clear, strong, childlike (in the best sense) jyōruri performances as Okon are powerful and moving.


On a side note, I noticed that the villagers were referring to Itako as Jinzuuriki (神通力) when she was using the fox’s powers to heal. This seems to mean that they believe that she has a kind of a supernatural power granted by the gods. The way it was pronounced sounded very similar to the term Jinchuuriki (人柱力), which is used by Masashi Kishimoto in the Naruto and Naruto Shippuden manga to describe people who have a Bijuu (尾獣, tailed beast) sealed within them. As Naruto himself has a nine-tailed fox within him, it made me wonder if the term ‘jinchuuriki’ has been derived from ‘jinzuuriki.’ This seems very likely as the Naruto series is chock full of references to Japanese folklore.
The Magic Ballad appears on Volume Three of the Tadanari Okamoto collection released earlier this year by Geneon Universal.