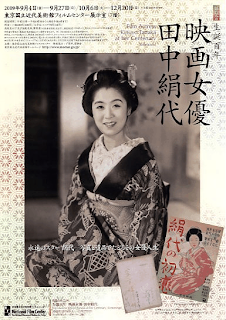 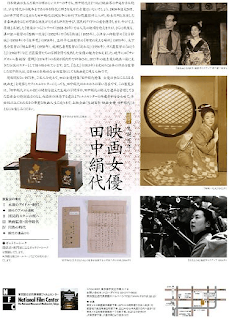 This year marks the centenary of the birth of Japan’s first woman film director Kinuyo Tanaka (田中絹代, 1909-1977). As an actress, she was indisputably at the top of her profession starring in (according to imdb) 24 Gosho films, 15 Mizoguchi films, 10 Ozu films, 8 Shimazu films, 6 Naruse films, and even a Kurosawa film (Red Beard, 1965) . Her career spans both the silent and sound eras. She has the distinction of having starred in the first Japanese talkie: Madamu to nyobo (The Neighour’s Wife and Mine, Heinosuke Gosho, 1931) as well as starring in the only film directed by Hollywood legend Sessue Hayakawa (Taiyo wa higashi yori, 1932). Tanaka won the Silver Bear at the Berlinale for her portrayal of a woman forced into prostitution during World War II in Kei Kumai’s Sandakan No. 8 (1974). Her final appearance on screen was in another Kei Kumai film Kita No Misaki (1976) in the year before her death.

In honour of Kinuyo Tanaka’s outstanding career, the National Film Center in Tokyo is holding extensive screenings of her films from October 8th until December 27th. The screenings will be accompanied by an exhibition about her life and career. The exhibition opened earlier this month and will run until December 20th. The materials come both from the NFC collection as well as from personal belongings from the collection in her hometown of Shimonoseki.

Screenings will include 9 silent films and 44 talkies. This may sound like a lot, but as the Japanese Movie Database suggests that Tanaka was involved in the production of over 200 films, the screenings are really just a taste of Tanaka’s illustrious career. The screening series’ official title is ‘Film Actress Kinuyo Tanaka at her Centenary (Part 1)’ (生誕百年 映画女優 田中絹代（１）, which suggests that a second screening series is planned for the near future, which I presume will feature her work as a director.