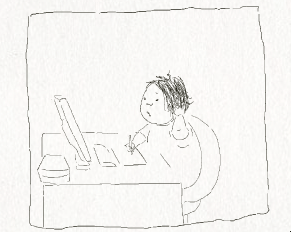 
The week always brightens considerably upon the discovery of an exciting young animation talent. This week, I stumbled upon the work of Shiho Hirayama (平山志保). Her minimalistic style and sense of humour (epitomized in the cute little animation of herself at work in the About Me section of her website – see screenshot above) are very appealing.

Born in 1979 in Saitama Prefecture, Hirayama has been working since 2006 as a freelance animator and illustrator. She uses computer animation (Flash, Photoshop, AfterEffects, Premiere) to create simple (in the sense of uncluttered) line drawing-style animations with a creative spirit reminiscent of early animators.

Hirayama’s recent short animation, Hiragana-gao (Hiragana Face), reminded me of Norman McLaren’s V for Victory (1941, 2’). Just as McLaren’s propaganda film to sell war bonds (watch it on the NFB site) features the metamorphosis of the letter V, Hirayama does the same thing with hiragana (the cursive Japanese syllabary). The symbol む(mu), for example transforms into this face:


And the symbolふ (fu) transforms into this face


I am hoping that this film is a work in progress, because if she were to lengthen it a little bit and add music, it could be a truly wonderful film.

© Shiho Hirayama
The extent of Hirayama’s talent can be seen in her 2008 film swimming, which won her a Special Prize at the 8th Laputa International Animation Festival. It also received a special mention at the 12th Japan Media Arts Festival. The short animation evokes all the awkwardness of a school swimming class. A chubby young boy, steps up reluctantly for his turn, after watching the sporty prowess of his peers. After clumsily jumping into the pool, however, his imagination turns the negative experience into a positive one. A beautifully animated little film. The changing of perspective (above water to underwater; variety of camera distances) is expertly handled and makes the film a joy to watch from beginning to end.

To see Hirayama’s films for herself visit her website. All three films can be viewed in full there. 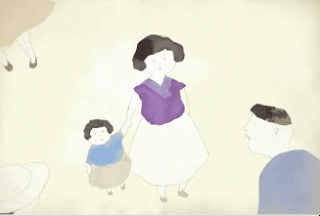