As the title implies, Hideyuki Hirayama’s adaptation of Takako Satō’s Talk Talk Talk (Shaberedomo Shaberedomo) is all about talking, both privately and in public. At the centre of the drama is the young rakugo performer Mitsuba, played by Taichi Kokubun of the boy band Tokio. Mitsuba’s colleagues and audiences find him a mediocre talent, but he is determined to succeed in order to honour the memory of his late grandfather who was a huge fan of this traditional form of storytelling.

Rakugo (落語) is performed in traditional costume while sitting down in the seiza (正座) position. The stories told are long and complicated comic tales involving a dialogue between two or more characters. The storyteller plays all the roles, distinguishing the different characters through variations in pitch, tone, and gesture. The comedy comes not only out of the story, but out of wordplay such as puns and onomatopoeia.

Mitsuba insists on using traditional stories despite the cajoling of his younger peers to try modern tales in order to make himself more popular. His main flaw is that he tries too hard to mimic his mentor Kosanmon, played with flair by the imitable Shirō Itō. In doing so, Mitsuba fails to infuse his storytelling with his own unique sensibilities.

Through happenstance, Mitsuba finds himself teaching rakugo to a motley crew of misfits in the living room of the home he shares with his grandmother Haruko Toyama (Kaoru Yachigusa). His first student is Masaru-kun, the nephew of one of Toyama-san’s tea ceremony disciples. Masaru has just moved to Tokyo from Osaka and is being bullied in school for his Kansai-ben (dialect). His aunt hopes that learning a skill will improve his self-confidence at school. There is also Satsuki Tokawa, a sullen but beautiful young women whose grumpy exterior belies the fact that she seems to diligently help her parents run the family dry cleaning business. Rounding off the trio is a retired baseball player, Yugawara, whose poor public speaking skills are ruining his chances of keeping his new job as a radio commentator. 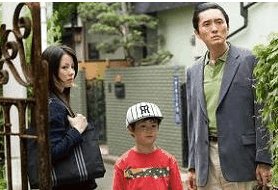 The camaraderie and good-natured squabbles of these rakugo classes acts a catalyst for each of the characters, including Mitsuba himself, to grow as individuals and to face problems they have in their personal lives. The film is heartwarming without being too sappy and has plenty of comedy with a dash of romance thrown in for good measure. The cast works really well as an ensemble with strong performances from all leading players. The ever graceful and beautiful Yachigusa brings such warmth and humour to a rather small role and the young fellow playing Masaru-kun (Yuuki Morinaga) practically steals the show with his infectious laughter and high energy performance.

The centerpiece of this film, however, is the art of rakugo itself. Through its use of repetition of the two main stories by different characters in the film, Hirayama teaches the audience how to appreciate the subtleties of the storytelling craft.

The trailer for this film can be viewed on its official homepage. The DVD (with English subtitles) is available: