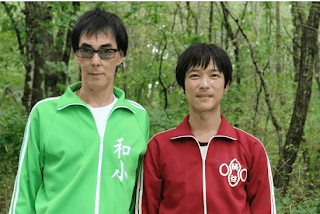 This film begins on a swelteringly hot day in Tokyo. A 54-year-old father and his 32-year-old son are escaping from the heat by indulging in ice cream in an air conditioned Mini-Stop convenience store. They decide to head to the family home in rural Gunma Prefecture to get away from the oppressiveness of summer in Tokyo.

Once in Gunma, they find that it is so cool that they need to put on warmer clothes. Searching about in boxes of items belonging to the late grandparents who used to live in the house, the father finds a collection of seventies-style colourful school tracksuits. These tracksuits become both a visual gag and a symbol of togetherness for the father and son: their ‘slow life’ uniforms, so to speak. The Two in Tracksuits (Jaji no Futari)
(click above to order film)
Two in Tracksuits (Jaji no Futari) could be described as a buddy film. However, unlike the American films that gave that genre its name, this is not a chatty film. Both men have a lot of issues to resolve, such as bad marriages, job dissatisfaction (the father) and joblessness (the son), but they do so by taking time to enjoy each other’s company and the peacefulness of rural life.

Rock star Makoto Ayukawa (father) and actor Masato Sakai (son) are both masters of the poker face, and the laughs are subtlety evoked through visual repetition and variation gags. For example, the father and son find tomatoes on sale at the local supermarket and fill their cart with them. Then neighbours begin giving them bags of tomatoes as presents, which leads of course to the running gag of them serving tomatoes (salad, sandwiches, etc.) to their visitors. It sounds very simple on paper, but left the audience in stitches during its screening at Nippon Connection.

The repetition and variation theme is reflected in the storyline. The film actually depicts two summers. The first summer, the men are alone in the family home. The second summer, the men are joined first by the son’s wife, then by his half-sister. The visitors are a clever device for showing the uniqueness of the father-son relationship which at first seems rather superficial. The ending (which I won’t spoil) uses one of the films running gags (about the difficulties of reading kanji) to demonstrate just how strong the bond between these two men is. A truly uplifting film for those who enjoy the ‘slow life’.