After much anticipation, my copy of Kunio Katō's latest film La maison en petits cubes (Tsumiki no ie) finally arrived in the post this week. It won the Annecy Cristal, the top prize at the prestigious Annecy International Animated Film Festival in June as well as taking two prizes at the Hiroshima International Festival in the summer. In contrast, the film seemed to controversially make no impression on the judges at the Ottawa International Animation Festival in September, so I was curious to judge the film for myself.

Kunio Katō (加藤 久仁生 b.1977) is a graduate of Tama Art University. He was already making a splash on the Japanese art animation scene as early as 2001 with his short film The Apple Incident, a rather surreal cel animation with a jarring soundtrack. With The Diary of Tortov Roddle (Aru Tabibito no Nikki, 2003), a series of six dream-like vignettes, Katō demonstrated that he had developed a strong, individual personal aesthetic. He uses a muted colour palette that complements the mood of each film. Tortov Roddle has a blue-grey-green colour palette with a watercolour feel to it, while La maison en petits cubes uses more sepia hues and saves the blue-green colour palette for the underwater sequences. The main character is easily identifiable in the flashback sequences because of the distinctive red of his shirt.

La maison en petits cubes tells the story of an elderly man living on the top level of a tall slender building (a theme extended from Tortov Roddle) whose home and village has been flooded. He has begun the onerus task of building more levels onto the house brick by brick (the 'petits cubes' of the French title). At one point, his pipe falls through a trapdoor and he buys himself a scuba diving suit in order to rescue the pipe. As he dives down through the various levels of his home, he is visited by memories from the past beginning with time spent with his elderly wife. Each time he goes down a level he enters further into the past: we see him taking a photograph of his family including a little granddaughter, greeting his daughter's beau for the first time and their marriage, morning rituals when his daughter was a little girl and his town was a Venice-like city on the sea, his daughter as an infant, and the history of his friendship and developing romance with his wife.

Perhaps the most moving scene is the one in which the young couple brick by brick begin to build their home together: a home which is now submerged both in the past as well as under the symbollically-laden water of the film. The key metaphor of the film reminded me of the Adrienne Rich poem “Diving into the Wreck,” although the diving into the past in La maison en petit cubes pertains more to a personal, spiritual journey than a political one. We do not learn whether or not the elderly man's family survived the flood, but from his solitariness as he rebuilds his house, the filmmaker suggests that he has indeed lost his family.

The melancholic and nostalgic feelings evoked by the film are complemented by the lyrical soundtrack composed by Kenji Kondo. The scenario was written by Kenya Hirata (平田研也), whom I believe is the writer who worked on the adaptation of Futaro Yamada's novel into the movie Shinobi (Ten Shimoyama, 2005). The handdrawn quality of the cel animation adds to the warmth of emotion in the film. Although Katō enjoys using a fairly sombre colour scheme, the loving attention paid to the execution of the characters and the scenery prevents his films from becoming too melancholy.

Le maison en petit cubes demonstrates that Katō has matured as an artist. Compared to The Apple Incident his technical skills an animator have become much more polished. Tortov Roddle has many delightful moments, but in terms of storyline and metaphorical meaning it is often difficult to decipher. Le maison en petits cubes, on the other hand, gives just enough story detail for the average spectator to follow, but leaves enough ambiguity for the film to resonate with a wide variety of metaphorical interpretations.

The DVD contains two versions. The first, which was clearly designed with Annecy in mind, has no narration and the credits are in French. The “Japanese” version includes a narration by the young actress Masami Nagasawa and has credits in Japanese. This narration is really superfluous, because the story is very expertly told without words. I imagine that this second version has been created in order to appeal to a wider audience on Japanese television. The DVD includes some biographical information about key staff and is accompanied by three stills from the film in postcard format. The official English title of the film is Pieces of Love, vol 1, whereas the the French and Japapanese titles literally mean 'a house of little blocks'. The English title is interesting because it suggests that this film is the first installment of a series of films. It will be interesting to see if Katō decides to elaborate on the story of the elderly man, in a manner similar to Tomoyasu Murata's My Road series. Judging from the fact that each of Katō's films so far has been stronger than the last, I look forward to seeing what this imaginative artist creates next.

If you enjoyed this film, read this post to learn about other great animation shorts by Japanese artists.

Aru Tabibito no Nikki
© Catherine Munroe Hotes 2008
Posted by Cathy Munroe Hotes at 11:53 am Links to this post

This cute little Flash animation by young animators Amica Kubo (久保亜美香 aka アミカ) and Seita Inoue (井上太) rose to acclaim in 2006 when it won the Excellence Prize at the Japan Media Arts Festival. The film has since appeared at international festivals around the world and in 2007 was one of the 7 winners (out of over 200 entries) of Studio 4°C's Next Genius competition. 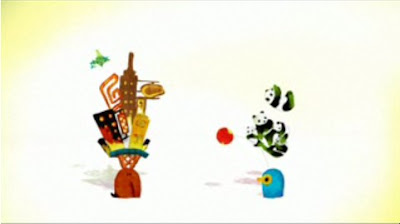 The short animation features two cute little creatures discussing possible travel plans to Hong Kong. As they talk to each other, their thoughts are animated above their heads. For example, when the female speaker first brings up the idea of traveling to Hong Kong, a depiction of skyscrapers is seen above the head of the little brown creature. The blue bird-like character with a male voice, on the other hand, things of panda bears. As their conversation progresses, the playful nature of their dialogue is expressed in the ever more elaborate visual displays of their thoughts, blooming like flowers above their heads.

The dialogue sounds very unscripted and reminded me of Nick Park's early film Creature Comforts (1989) which used a documentary soundtrack of interviews conducted with real working class people to animate animals talking about living conditions in their zoo. The idea in Blooming Words is that the words only give a mere suggestion of what the speaker is thinking about. Japanese, particularly informal Japanese, suggests many more things than what are explicitly said and I think this film does a superb job of demonstrating that. As the visuals build higher, we also get to see a visual display of stream-of-consciousness thought as the female speaker begins talking about Hong Kong, then moves on to mention Hokkaido another popular holiday destination), a TV ad featuring Tsuyoshi Shinjo and so on.

Amica Kubo, a graduate of Tokyo Polytechnic University, has a new film, Go! Moo Coaster! (ゴー！モーコースター) being distributed overseas by Duck Studios. The trailer suggests that the film will feature a small animated rollercoaster on everyday objects such as the spiral binding of a sketchbook. Kubo also sat on the judging panel at this year's animation festival in Ottawa.

Kyoto-born Seita Inoue has been studying at Tama Art University under the tutilage of such animators as Taku Furukawa, Georges Schwizgabel, and Sylvain Chomet.
Go!MooCoaster!

Detroit Metal City Vol.1
Animation
Posted by Cathy Munroe Hotes at 11:19 am Links to this post