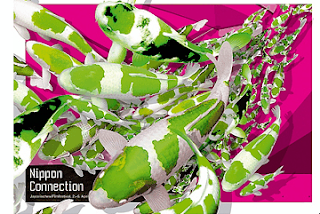 The Nippon Connnection film festival in Frankfurt has finally unveiled its program for this year. Tickets go on sale March 17th and can be ordered via their website or from the venues. I'm excited to see that they will be doing a retrospective on Japanese Independent Animation from the 1960s until the present date. The only individual artists they mention are Renzo Kinushita, Yoji Kuri and Taku Furukawa. The only other short animation listed is under the umbrella Nippon Digital, so I'm feeling a bit deflated. I had hoped that Koji Yamamura's Kafka Inaka Isha and Tomoyasu Murata's new shorts might show at Nippon Connection this year. I'll have to see if I can make it down to the Internationales TrickFilm Festival in Stuttgart in May.

There are a lot of feature films I have been wanting to see on the Nippon Connection program including Naomi Kawase's much celebrated film The Mourning Forest (Mogari no mori, 2007),
Nobuhiro Yamashita's A Gentle Breeze in the Village (Tennen kokekkou, 2007), and Ting Li's controversial new documentary Yasukuni (2007). For the full program, check out the Nippon Connection website.
Posted by Cathy Munroe Hotes at 12:08 am