I had the opportunity this week to check out the Anime! High Art – Pop Culture exhibition at the Deutsches Filmmuseum in Frankfurt am Main. The exhibition has been timed perfectly to coincide with Nippon Connection next month as well as Neo Tokyo3: Architecture in Manga and Anime running next door at the Deutsches Architekturmuseum (until June 8th). 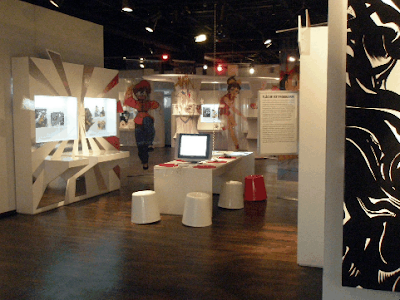 The first section was particularly informative for me. I had not realized that many of the old cartoons that my husband and his friends grew up with in Germany in the 1970s were actually animated in Japan. Wickie und die Starken Männer (Chiisana baikingu Bikke, 1974) and Die Biene Maja (Mitsubachi Maya no boken, 1975) don’t have the typical ‘anime’ look about them and I always presumed that they were designed in Europe. Heidi, Girl of the Alps has what I call an ‘anime’ look: kawaii characters with big round eyes. I had always thought that these projects were conceived in Japan and then sent around the world for dubbing, but it turns out that international co-productions were more extensive than I had realized. European broadcasters, particularly ZDF in West Germany, sought out co-productions with Japanese animators in order to keep costs down. The character design and story for Biene Maja was initiated in Germany, but animated in Japan with some contributions from animators at Warner Brothers. The most interesting evidence of this were the drawings with notes written on them in English and Japanese. The resulting series is actually a West Germany-Austria-USA-Japan co-production.

The next three sections of Anime! High Art – Pop Culture give an overview of some of the sub-genres of anime, with nods along the way to Studio Ghibli and Osamu Tezuka. The section on Amano Yoshitaka features twelve paintings that feature off-centre details from anime characters, with particular emphasis on the eyes. His large mural Universe (lacquer on aluminum, 2002) is most impressive and requires quite a bit of time to take in all the details on it. The final section looks at the futuristic genres in anime and ponders whether or not there is a future for 3D animation in Japan. So far, the Japanese seem to prefer using 2D animation for reasons that range from financial (cheap to make) to the aesthetic (a cultural tradition of ‘flat’ aesthetic).

I am not sure why the title of the exhibition puts high art before pop culture, because the only section that could be considered high art are the paintings and the mural by Amano. If I had any criticism to make of the curatorial choices, I would suggest the inclusion of more ‘high art’ for one to compare and contrast with Amano’s work. Amano, like so many Japanese animators, has one foot in the popular culture scene and another in the world of high art. He is most famous for his design work for the Final Fantasy computer games and popular anime like the Gatchaman series and Tekkaman.

The best part about the exhibit is the book Ga-Netchū! Das Manga Anime Syndrom that they commissioned to complement the ideas raised by the selection of art they selected. The book features essays from a wide selection of authors written in German or translated from Japanese or English to German. As the exhibit will be moving to the States later this year, it seems likely that the book will also be translated to English at some point. The book features a lot more art than was in the museum. I was pleased to see the inclusion of a short piece by quirky manga artist and animator Shiriagari Kotobuki whose work I have reviewed before on this blog. 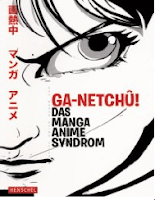 Anime! High Art – Pop Culture runs at the Filmmuseum until August 3rd. It will head to the Louisiana Museum of Modern Art this autumn (October 8th, 2008 – February 22nd, 2009) followed by a stint at the Academy of Motion Picture Arts and Sciences next year (May-August 2009).