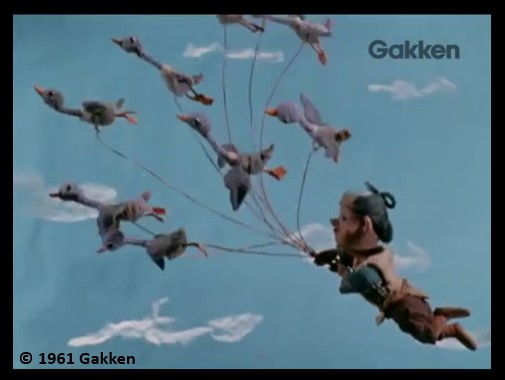 The Gakken stop motion animation Gonbe’e, the Duck Hunter (かもとりごんべえ / Kamotori Gonbē 1961), is an adaptation of a common Japanese folk tale.  It was distributed in 1969 as an educational film in the United States by Coronet Instructional Films under the title The Man Who Wanted to Fly.   I have not seen the US dub of the film but in the Japanese version the man, Gonbe’e, flies accidentally not by desire, so I am using the literal translation of the title for this review.  Doubtless, the US dub dropped the name Gonbe’e because it would be difficult for English-speaking children.  In Japanese, the name “Gonbe’e” is a kind of everyman’s name, the equivalent of “John Doe”.  In folk tales and songs, Gonbe’e is usually a kind of country bumpkin or simpleton.

The story begins with an idyllic scene of ducks enjoying a pond.  Suddenly one of the ducks is captured by a lasso.  Before we see who has thrown the lasso, a children’s song introduces us to “Kamotori Gonbē-san” (Mr. Gonbe’e, the duck hunter).   Gonbe’e steadily pulls in his catch and the scene cuts to a blindfolded boy playing blind man’s bluff with other children.   The blindfolded boy runs into two men, who ask him if he has seen Gonbe’e.  He points them in the right direction.

The men decide to see if they can convince Gonbe’e to catch more than one duck a day as it would be profitable for them.  “Why catch only one, when you could catch many?”, they tell him.  Gonbe’e, being a simpleton, is easily swayed, saying: “Oh I never thought about that. What a great idea!”  Gonbe’e  figures that if he were to catch many ducks at once, he would then have more time to play and laze about.


Gonbe’e goes home, where his wife is busy on the spinning wheel.  He tells her his new plan, but she advises him against it.  The next day he catches four ducks and the men handsomely reward him, encouraging him to catch even more.  Early the next morning, while it is still dark, Gonbe’e sneaks up to the sleeping ducks and puts ropes around all of the their necks.  Just as dawn breaks, he ties all the ropes around his waist.  The ducks awake and startled by the ropes, fly off carrying Gonbe’e with them. 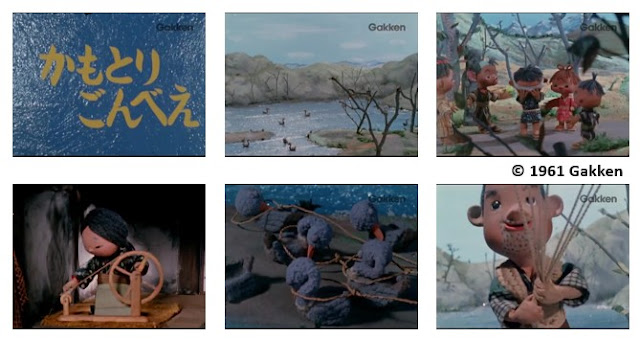 A farmer reaping his daikon radish spots him, as does his wife, the children, and an elderly man.  They all fear for his safety.  Here the director Matsue Jinbo (神保まつえ) has chosen to dramatize Gonbe’e’s distress by giving us a point-of-view shot with the camera lurching wildly over the set.  Stop motion animations at this time would usually only give us one point-of-view of the set with changes in camera distance, so it is great to see a non-experimental film (this is an educational film for children) think outside the box in terms of techniques.  A great deal of thought had to go into the landscape design so that they could shoot these sequences from above as well as from the side.

Thus begins Gonbe’e’s misadventure across the countryside: startling a shop owner and his customer, nearly drowning in a pond, before finally being attacked by a bird of prey who loosens Gonbe’e from the ropes.  He falls and lands on the roof of a tall pagoda.  Inside, a Buddhist monk and his apprentice are praying.  In a comical little sequence, the apprentice, who playing a drum, is lulled to sleep by the monk’s chanting of the sutra.  His reprimand is interrupted by the cries of Gonbe’e on the roof. 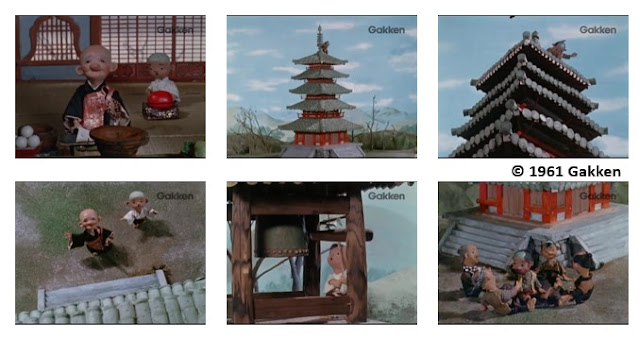 The apprentice rings the heavy bell to summon the villagers to assist.  There is much hand-wringing, scratching of heads, and prayers by the monk over what to do.  Their ladder is too short, so they decide to stretch out a blanket for Gonbe’e to jump into.  After being rescued, Gonbe’e heads home, arriving after dark much to the relief of his long-suffering wife.  He pledges to her that from tomorrow he will return to his former ways.  The short film concludes with a reprise of the children singing “Kamotori Gonbē-san”.

This story has been published as a children’s picture book many times.  The one that I recall includes two additional misadventures which see Gonbe’e falling into farmer’s field and into an umbrella shop, and in both cases causing more work that he needs to stay for a time to help with.  Sometimes the number of ducks is quite ridiculous - as many as 99!  This adaptation reduces the number of misadventures in order to get to the more amusing climax of Gonbe’e stuck on the top level of a pagoda.  It is cleverly done and sure to amuse the young children that are the target audience of the film.

The setting must be quite old as the duck hunting is performed with lassos rather than with guns.  The only kind of traditional duck-hunting that I have heard of are the kamoba (Imperial Wild Duck Preserves), where they lure the ducks into a prepared area and capture them with large nets).  Guns began being used extensively in Japan during the Sengoku Period (Warring States Period, 1467-1573), but I imagine they were not available to peasant farmers until much later.

Of all the Gakken fairy tales that I have reviewed thus far, this one is my favourite for its excellent storytelling and clever puppet and set designs.  I like that the villagers, particularly Gonbe’e, are a little rough around the edges.  The puppet makers have clearly given a lot of thought to how to make the puppets expressive of character.  Many puppets were made for this piece.  Although most of them do not speak, they give life to the village from the mother with the baby on her back to the children playing blind man’s bluff.   The pagoda design, both inside and out, is also excellently done.  This children’s classic was brought to life by the producer Haruo Itoh (伊藤治雄) and director Matsue Jinbo (神保まつえ).