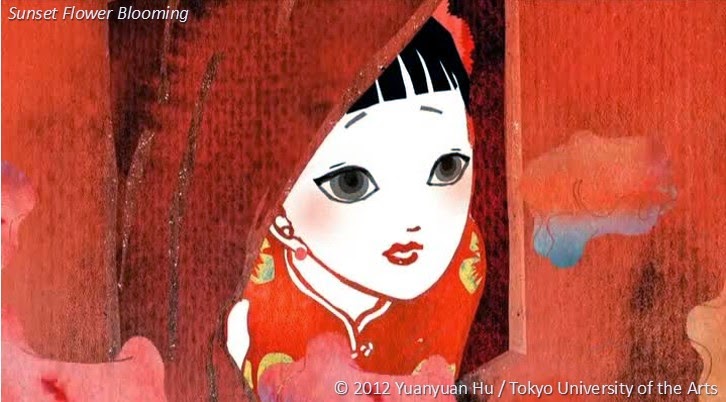 Yuanyuan Hu’s Sunset Flower Blooming (夕化粧/Yugesho, 2012) is set in the countryside in 1960s China.  A grandmother sits and hums in her walled garden as her granddaughters play with evening primroses (夕化粧/Yugesho). The growing shadows let us know that the day is coming to an end – the time at which the primroses open their small pink buds.  The granddaughters decorate their grandmother’s hair with primroses and one girl brings her a mirror to show her their handiwork.  The girl pauses and looks down at her grandmother’s feet encased in tiny pointy shoes.  She then moves her own bare feet in large, boxy sandals as if comparing sizes. 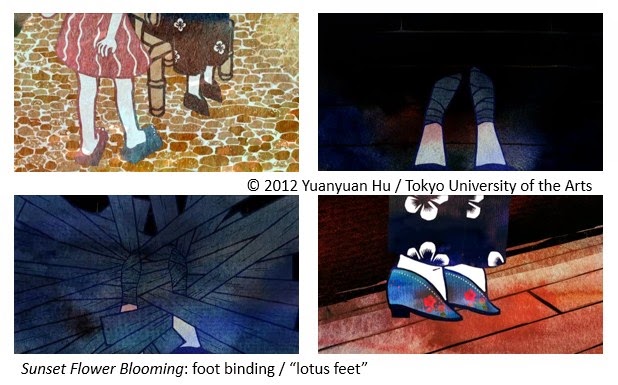 This gesture draws attention to the cultural gap between the two generations of females in this film.  The grandmother was born into a time when foot binding (also known as “lotus feet”) was still a common practice in China.  For centuries it was considered a symbol of beauty and status for girls to have small feet.  Starting between the ages of 4-9, girls’ feet were broken and bound using (horrific) traditional methods that would force the ball and heel of each foot close together (learn more).  The practice was banned in the early decades of the 20th century, but not strongly enforced until the Communists rose to power in 1949.  Thus the young girls in the film and their mother(s) would not have been subjected to this cruel tradition. 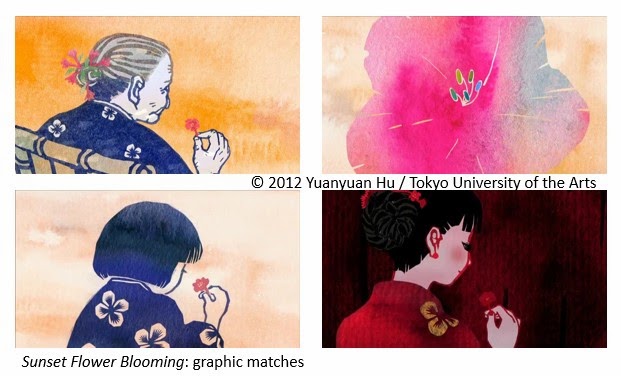 After this brief, but significant, moment the grandmother puts down the mirror and takes a primrose from her hair, twirling it gently with her fingers.  Expertly using graphic matches of the grandmother at varying ages, Hu takes us on a journey to the past as the grandmother recalls her early childhood and preparations for marrying someone of status.  Although the sound of children at play bridges over into the past from the film’s “present”, the way in which the children are depicted in a washed out fashion suggest that they may have been imaginary friends – or that they were only fleeting friends who figured only briefly in the grandmother’s life.  Despite the beauty of the natural world and the lovely depiction of the changing seasons, imagery of confinement (closed behind latticed screens and windows in dark rooms, walled gardens, moths trapped inside a lantern with a burning flame, and so on) and loneliness remind us of the lack of choice the grandmother had as a child.  Her psychic trauma is depicted through brief, haunting sequences such as a needle and thread through cloth transforming into a pool of blood, and a twirling evening primrose turning into blood red flames.

In the end; however, the film does not present a picture of bitterness and resentment on the part of the central protagonist.  The gentle soundtrack (music, wind and other natural sounds) and the framing narrative of the laughter in the garden, suggest that the grandmother has come to terms with the path of her life.  Yuanyuan Hu used digital computer drawing to give the film a look of watercolour paint on soft paper.  Although it has been realised on computer, the animation at times has the look of woodblock printing and kirigami (cutouts).  It is a hauntingly beautiful tale that educates about the wrongs done to women in the past with a positive outlook for future generations of girls in China.

Yuanyuan Hu (胡 嫄嫄/コ・ユェンユェン, b. 1986) is from Nanjing, China.  She has a master’s degree in animation from Tokyo University of the Arts.  She continues to live and work in Yokohama.  Sunset Flower Blooming was named to the Jury Selection at the Japan Media Arts Festival in 2012.