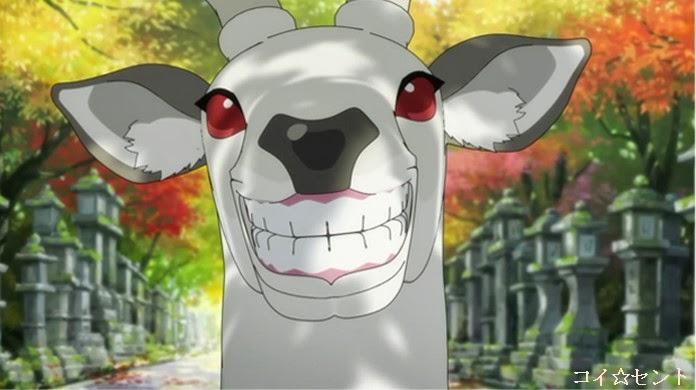 The year is 2710 and the city of Nara is celebrating the 2000th anniversary of the relocation of the capital city of Japan to Nara.  A larger-than-life hologram of the legendary Queen Himiko (170-248AD) of Wa (ancient Japan) welcomes visitors in the style of a modern day tourist group leader.  Teenager Shinichi (Kensho Ono) and his buddy are enraptured by Himiko’s beauty and hope that they will meet girls as beautiful as her during their stay in Nara.  Before he can get very far, a strange white shika deer (Kappei Yamaguchi) steals his bag and Shinichi gives chase.

In a parallel story we learn that Himiko has been brought back to life by Madame President (Masako Isobe) using a mysterious robotic technology for a purpose that is equally mysterious.  But as in many a sci-fi story (Chobits, Yokohama Todaishi Kikō, Time of Eve), this android-human hybrid develops her own feelings and desires.  Himiko tries to escape her creator and her two henchmen sons (Aniki is voice by Testsu Inada and Otōto by Takehito Koyasu) who resemble clowns seem more powerful because they are riding on red and blue oni (demons).  Our heroine climbs out of the giant President’s building and through the bumbling of one of the henchmen brothers gets knocked falls from the tower onto the back of the white shika deer where she is inadvertently “rescued” by Shinichi.  Himiko disguises her identity by transforming herself into a teenage girl called "Toto" and Shinichi is awestruck.  They tour Nara together and begin to fall in love.  Will this teenage romance have a happy ending or will Himiko be recaptured by her creator Madame President?  It’s a wild and unpredictable, but thoroughly entertaining journey easily enjoyed at just 26 minutes.  Be sure to watch the end credits or else you will miss out on the dancing shika!!

When Sunrise animation studio announced Coicent (コイ☆セント/Koi☆sento, 2011) back in 2010, they dubbed it a “super science-fiction romantic comedy” (ANN), and it certainly does have a smattering of each of those genres.  It’s a fantastic blend of old Japan, new Japan, and future Japan, with skyscrapers, shrines and Buddha statues cropping up close together like the layers on a pop-up storybook.  Viewers unfamiliar with the historical and mythological figures and symbols might be scratching their head at the goings on, but die-hard anime-fans are used to head-scratching.  The central character, Shinichi, scratches his own head quite a bit as he is thrown from one surprising scenario into the next and we as the audience go through a similar range of emotions from bemusement to surprise and delight. The character designs and backgrounds are all spectacular.

The only drawback to Coicent for me is its unfortunate official “English” title.  I would have much preferred Koisento or Koi☆sento to this nonsense pseudo-English.  The title is a bit ambiguous in katakana, but I would presume that the “koi” is meant to be “love”.  “Sento” could be a number of things, but my educated guess from the context of the film is that it refers to the moving of the capital (遷都).  The capital city of Japan has moved many times throughout history – its location was traditionally dependent upon where the emperor was living.  Tokyo has been the capital since 1868 (the beginning of the Meiji era).  Before that it was in Kyoto for nearly 7 centuries.  Nara was the capital during the reign of many emperors, the last being during the Nara Period up until the death of Emperor Kammu in 794.

Director Shūhei Morita (森田修平, b. 1978) was nominated this week for the Oscar for Best Animated Short for Possessions (九十九/Tsukumo), his contribution to the Short Peace (2013) omnibus.  Morita grew up in Nara – which would explain the wealth of imagery from both the historical and mythological past of the region – and graduated from Kyoto University of Art and Design in 2001.  He has done animation work for MTV Japan, the NHK, and Studio 4°C.  Since forming his own studio Yamato-Works in 2003 he was been developing his own independent animation vision in collaboration with other production companies.

Coicent can be found on Hulu in the US.  In the US it also shares a Blu-ray with the short anime Five Numbers! (ノラゲキ！, Hiroki Ando, 2011): Coicent / Five Numbers [Blu-ray]

. The film has its own stand-alone DVD and Blu-ray in Japan:

Koisento DVD or Blu-ray (JP only, no EN subs or dubs)