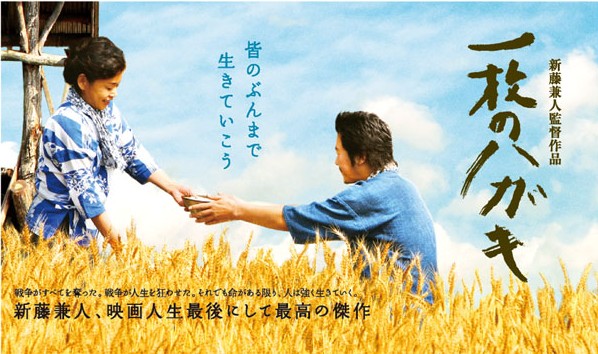 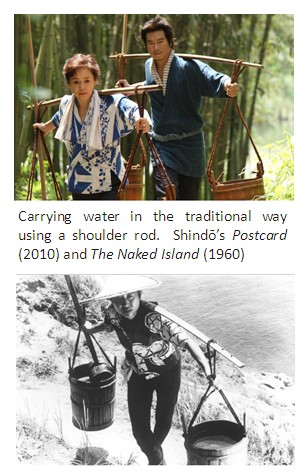 Tomoko does not live on an island but she is similarly trapped by circumstances of fate.  Women living in rural Japan during World War II may just as well have been living on islands for their choices were limited.  Tomoko has been living a meagre existence with her husband Sadazo (Naomasa Musaka) and his elderly parents (Akira Emoto and Mitsuko Baisho).  They were poor but happy for 16 years until Sadazo is called up into military service.  Sadazo is then one of the unlucky chosen by the drawing of lots to be shipped off to Manila.  On the eve of his departure, Sadazo shares a poignant postcard from his wife with his bunk mate Keita Matsuyama (Etsushi Toyokawa).  Sadazo has been unable to bring himself to reply to the postcard because he knows that anything he writes that is personal will be censored by the military.  He predicts that Matsuyama will be more likely to survive the war on home front duty and gives the postcard to Matsuyama for safekeeping, asking him to take it to Tomoko after the war and tell her that he received it.

In structuring the film, Shindō has tried to find a balance between tragedy and comedy.  Indeed, tragedy upon tragedy befalls poor Tomoko in the first half of the film to the point that it almost becomes farcical.   Matsuyama himself also returns home to find his life is a tragi-comical disaster.  Matsuyama’s arrival on Tomoko's doorstep with the postcard shifts the balance towards comedy and romance with Ren Osugi putting in a terrific comic performance as a married man who desperately wants Tomoko to become his mistress.

As a female spectator I had mixed feelings about the film at first because for the first half it felt like yet another drama that romanticizes the self-sacrificing wife.  Tomoko is willing to not only do hard labour, but also to marry her brother-in-law in order to fulfil her duties to her husband’s family.  I was won over in the end by the realistic touches in the film.   Shindō has not cast the film with starlets but with mature actors who bring a lot of authenticity to their roles.  Although the string of tragedies Tomoko has to endure seems over the top to us today, such tragedies were sadly all too common in wartime Japan.  Shindō does not romanticize Tomoko’s life, he rather lays it bare.  From sex as a chore to preparing meagre meals with leftover scraps, Tomoko holds her head up high and survives all that life throws at her.

The most touching part of the film is the knowledge that for his final film, Shindō has chosen to tell his own story.  He too was drafted into the Imperial Japanese Navy.  Of the 100 men he served with, 60 were indeed chosen by lottery to serve on a ship and died when their ship was attacked by a submarine.  30 men were selected to serve on a submarine and were lost, and another four were selected to act as machine gunners on freight ships and were also killed.  Shindō was one of six men selected, like Matsuyama, to clean the Takarazuka theatre and they were the only ones from the 100 to survive the war.  "I have always had the souls of the 94 with me and have made them the theme of my existence," said the director when promoting the film at a press conference (source: Mark Schilling).  It is fitting that a director who has dedicated his career to facing injustice full on should end his career with a tribute to the memory of those men whose sacrifice gave us the gift of his talents as a director and screenwriter.

Posted by Cathy Munroe Hotes at 7:06 am