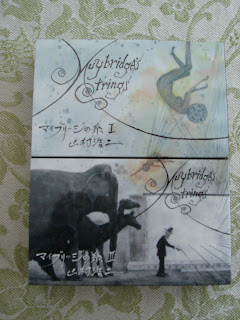 Fans of Kōji Yamamura who live outside of Japan may not be aware that it has become a tradition for the great animator to publish a book tie-in along with his latest film releases.  For Kafuka Inaka Isha, he published a slim, hardcover illustrated storybook edition of Franz Kafka's acclaimed short story A Country Doctor in Japanese translation.


For his latest animated masterpiece Muybridge’s Strings (マイブリッジの糸, 2011), Yamamura and his publishers came up with the ingenious idea of creating  flip book tie-ins.  According to the introduction,  Yamamura wanted to create a book that would reflect the temporal themes of the animation.  Although I have not yet seen it, I have read that Muybridge's Strings employs a parallel editing structure that interweaves a story from the past (the time of Muybridge) with a story set in the present.

There are two complementary flip books available: (マイブリッジの糸I and マイブリッジの糸II).  They are published in a format of 13x8cm and consist of a slipcase and flip book in full colour, accompanied by a monochrome paper booklet.  When the front covers of both slipcases are pushed together (top photograph) they form the full length poster for the film.

Each flip book features a series of images on the right-hand side pages and transcribed music from the film by Normand Roger and J.S. Bach on each facing page.  The pages are of two different alternating lengths which means that once you have flipped through one side of the book, you can turn the book over and flip through a different series of images.  This forward and backward structure is also drawn from the animated short which references J.S. Bach's Crab Canon - a clever piece of music which is the musical equivalent of a palindrome.  It is best scene and heard, so I recommend checking out this helpful explanatory video.

Both flip books are accompanied by the same information booklet.  It features an introduction by Yamamura as well as an interview with him about not only the flip books but also the making of this Japanese-Canadian (NFB/NHK/Polygon) co-production.  See all photos on Google Plus or Facebook.  Even if you cannot read Japanese, these books are a visual delight and a must-have for collectors of independent animation.