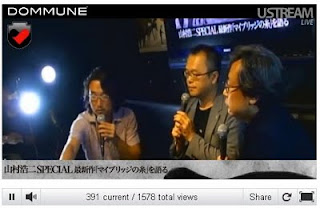 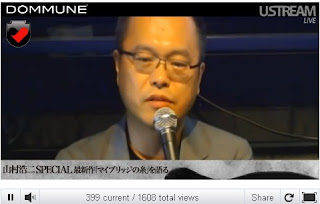 Earlier today (around midday Central European Summer Time), Dommune did a live broadcast event with Koji Yamamura on USTREAM Live. He was interviewed by Shuzo Shiota, the president and CEO of Polygon Pictures – and one of the co-producers for Muybridge’s Strings. Also participating in the talk was animation expert Yukio Hiruma. In addition to co-producing some of Yamamura’s early work (Kid’s Castle and Kipling, Jr.), Hiruma also recently acted as a digital effects supervisor on Keita Kurosaka’s masterpiece Midori-ko (2010)
The middle of the day was a bit awkward for me because my live-in translator (ie. my husband) was not around to help me out with the nuances of the Japanese language and I had to pick up my kids from school. Some of the highlights that I did catch included:
Original drawings from the production of Muybridge’s Strings: 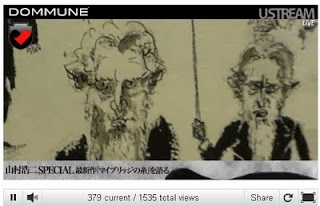 Behind the scenes photographs from the soundtrack recording and mixing sessions in the NFB studios in Montréal – Yamamura talked reverentially about the whole experience of working at the NFB studios. . . and with shock about how cold it gets in Montréal in the winter.
The original music and sound design are by Normand Roger, Pierre Yves Drapeau, Denis Chartrand. Yamamura talked a bit about the impressive career of Norman Roger - who has done the soundtracks to more than a hundred films by top animators from around the world. Yamamura mentioned in particular Roger’s collaborations with Frédéric Back such as Crac! (1981) and The Man Who Planted Trees (1988). Yamamura was careful to point out that although the two men have collaborated together that Back was not an NFB employee. Learn more about this collaboration at filmjourney and Back's official website.
I tried to get a couple of screencaps of a wonderful illustration of how a sequence of music borrowed from Bach should go together with the animation. The image was too shaky to get a good shot of it, so I do hope that it appears in the Making Of footage / DVD extras when the time comes – it was a piece of art in itself.

Shiota, Yamamura, and Hiruma then moved into a discussion about the Muybridge’s Strings Road Show, which opens on September 17th and runs until October 7th at the at the Tokyo Metropolitan Museum of Photography in Ebisu. They went through Program B discussing the films by Norman McLaren, Jacques Drouin, Ishu Patel, Georges Schwitzgebel, Amanda Forbis and Wendy Tilby that will be running alongside Yamamura’s work.

Before I had to race out the door to pick up my kids, I managed to catch a some the clips of McLaren’s Canon (1964), Drouin’s Mindscape and Patel’s Afterlife (1978) - not a part of the program but they indulged in a clip anyways - and The Bead Game (1977). Yamamura had brought along some wonderful items from his personal collection including a present of 5 pins from Drouin who is famed for his use of the pinscreen technique.
He also told an anecdote about meeting Ishu Patel for the first time when he was a very young man. I thought I heard him say that it was at the Hiroshima International Animation Festival, and when I looked it up I found that Patel had indeed been on the International Jury of the first ever animation festival in Hiroshima in 1985 when Yamamura would have been a university student.
Can’t wait for Muybridge’s Strings to make it to Europe!
To see all the screencaps I took, see my Google Plus Photos
Support Koji Yamamura buy ordering his work on DVD:
Order from Japan via cdjapan:

Posted by Cathy Munroe Hotes at 6:17 am