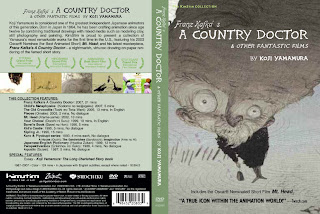 marks the first English-language release of the oeuvre of internationally acclaimed animator Kōji Yamamura (山村浩二, b. 1964). Yamamura is one of the few alternative animation directors well represented on DVD in his native land, but these domestic releases – while beautifully packaged and with lots of extras – are not always with English subtitles.
For fans already in possession of Yamamura’s Japanese DVDs, Franz Kafka’s A Country Doctor and Other Fantastic Films by Koji Yamamura

is not a complete works, but it does feature Yamamura’s most important works to date except for Fig (無花果, 2006) which appears on Tokyo Loop (read more) and Man and Whale (校長先生とクジラ, 2007) which was made for the Whale Love campaign (read more). As the DVD highlights Yamamura’s A Country Doctor in its title, I was surprised that KimStim did not translate some of the written material on the Japanese release of the film – which includes an essay about the adaptation of Franz Kafka’s surreal literary classic and biographies of the actors (the Shigeyama family and award-winning novelist Hitomi Kanehara) doing the astounding voice work on the film. The Japanese DVD also comes with 3 postcard-sized stills.

Order DVD
Other DVDs available in Japan include Mt. Head: Koji Yamamura Animation Works and The Old Crocodile and Koji Yamamura’s Selected Animation. Although the menus on Mt. Head are all in Japanese, all of the films have English subtitles when needed apart from the bonus materials (making of Aquatic, et al.). The Old Crocodile features the title film with English titles and a selection of some of Yamamura’s favourite world animation classics: The Bead Game (Ishu Patel, 1977), Frank Film (Frank Mouris, 1973), Revolver (Jonas Odell, et al., 1993), Swamp (Gil Alkabetz, 1991), Begone Dull Care (Norman McLaren/Evelyn Lambart, 1949), Travels of an Ant (E. Nazarov, Films by Jove, 1983) and Time Out (Priit Pärn, 1984).

offers international collectors the best option. Although the DVD has quirky elements to its presentation – arbitrary grouping of the films into three periods, handwritten film menus where the letters “n” and “m” look confusingly the same, and having the films in reverse order (latest to oldest) – the quality of the image and the optional English subtitles are good. There are problems with the English language soundtrack to The Old Crocodile.  During "dialogue" one of the two voices is much fainter than the other.  I did not notice this problem on the Japanese DVD.

, and Kihachiro Kawamoto’s Book of the Dead

and The Exquisite Short Films of Kihachiro Kawamoto

(read more about Kawamoto on DVD). 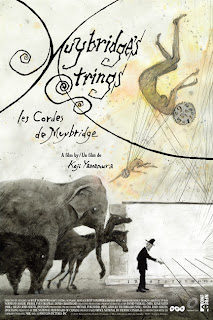 Yamamura’s latest work Muybridge’s Strings (Les Cordes de Muybridge/マイブリッジの糸, 2011) will have its world premiere at the Cannes Film Market (which runs concurrently with the Cannes Film Festival) this month in the “Perspective Canada: Not Short on Talent” screening event. See the trailer for this Japanese-Canadian co-production on the Telefilm Canada website.
Catherine Munroe Hotes 2011
Posted by Cathy Munroe Hotes at 4:19 pm