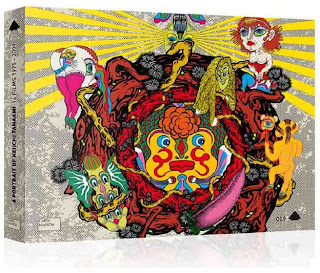 If an artwork is not filled with the artist’s spontaneous emotions
how can it provoke any sense of wonder or feeling in others?
- Keiichi Tanaami, 2 August 2009

Many trends have come and gone in the art world during the course of Keiichi Tanaami’s career, but throughout it all he has remained true to his own unique artistic vision. Looking back at the dozens of films that he has made since the late 1960s, there is a sense of continuity to his repeated use of a psychedelic colour scheme, characters with oversized features, sexual imagery, those beguiling goldfish, and his flickering aesthetic. Tanaami (田名網 敬一, b. 1936) is constantly revisiting familiar themes and motifs, yet his films seem just as fresh and invigorating today as they must have to audiences forty years ago.

Last year, the Parisian DVD publisher Chalet Pointu in collaboration with CaRTe bLaNChe and ARTE (the French/German TV network) published the first French edition of Keiichi Tanaami’s work. Un portrait de Keiichi Tanaami / A Portrait of Keiichi Tanaami /田名網敬一の肖像 : 14 Films 1975-2009 is a trilingual book (French/English/Japanese) with the DVD tucked into the back page of the book’s hardcover. (German readers can check out a profile of the book and the artist at ARTE)

The book itself is a small coffee table book. The introduction is a text written by the legendary avant-garde writer/artist Shūji Terayama (寺山 修司, 1935-1983) that was originally published in an Image Forum catalogue from 1975. This is followed by 79 pages of full colour art from Tanaami’s animated films, synopses of the films on the DVD, a short biography and a filmography.

Apart from Sweet Friday, Why, Goldfish Fetish, A Portrait of Keiichi Tanaami, The Harmonic Gleam Vibration, and Madonna, the other nine works are all collaborations that Tanaami has done with Nobuhiro Aihara (相原信洋, 1944). Scrap Diary, Fetish Doll, 10 Nights’ Dreams, and Puzzle of Autumn also appear on the out of print DVD Box Set Tanaami Keiichi + Aihara Nobuhiro: Animation Scrap Diary + Live Painting Animactions!! (2004). Sweet Friday, Scrap Diary, Memories Hidden in Darkness, and Gaze in Summer 1942 also appear on the DVD Tanaamism, 1975-2002. Why and Goldfish Fetish also appear on Tanaamism 2, 1971-2002 (also available as a box set).

As far as I am aware, this is the first time that A Portrait of Keiichi Tanaami (2003), The Harmonic Gleam Vibration (2005), Madonna (2005), Chirico (2008) and Shunga (2009) have appeared on DVD, making this set a valuable addition to any collector’s DVD library. The DVD also includes an insightful interview with Keiichi Tanaami from the summer of 2009 as well as an interview with German filmmaker and experimental film expert Helmut Herbst from an ARTE broadcast.

On the whole, it is a very satisfying release – a rare example of Japanese experimental animation being presented in a multi-lingual format. The only thing that would have made it even better for me would have been a concentration on recent work. While the Shuji Terayama essay is interesting, it is out-of-date and refers to films not available on the DVD. It would have been nice if they had asked Aihara to write the introduction in order to shed more light onto his collaborative work with Tanaami. In the Tanaami interview, we learn many fascinating details about how their collaboration functions and it would have been wonderful to hear about this fruitful artistic collaboration from both points of view. As Tanaami and Aihara’s films play so rarely overseas, it would have also have been nice if the set had also included other recent works like Madonna’s Temptation (2005), Noise (2006) and Inch-High Samurai (2007).

These critiques are; however, mere trifles. It’s a beautiful, affordable, collectable set that whets the appetite for more. I hope that Chalet Pointu will consider publishing a sequel. To order this book from Chalet Films (FR/EN) click here.  Also available in Japan.

Experimental animation fans in Canada should be sure to check out the upcoming Tanaami screening events in Toronto, Winnipeg and Montréal.