Nippon Connection is starting tomorrow and I’m excited about all the animated shorts I will be able to watch at events like Digista Vil. VIII, DOME Animation Special, and Open Art Animation. Thanks to NHKOnline and YokohamaArtNavi, I have already seen a number of the shorts, including Ryo Okawara’s Animal Dance (アニマルダンス, 2009), but nothing beats the pleasure of seeing films projected on the big screen together with an audience.

Okawara (大川原亮, b. 1986) is a graduate of Tamabi’s Graphic Design programme. Together with Masaki Okuda and Yutaro Ogawa, Okawara co-directed the short animation Orchestra (オーケストラ, 2008, 6’40”) which is also featured at YokohamaArtNavi. He has also directed another short film called Insomniac (2009, 2’30”). 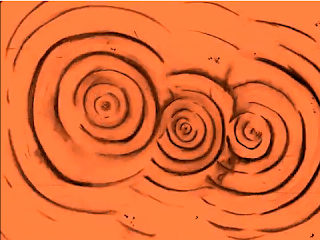 The visuals are beautiful in their simplicity & attention to detail.

Sometimes student works seem clumsy, but Okawara’s films are all very professionally crafted. One does get a sense of an artist at the beginning of his career through the way in which his films play with combining visually intriguing animation with music. Animal Dance is a hand-drawn animated short (black charcoal on an orange background) synchronized with a piano score composed by Ayoan Igokah (アヨアン族イゴカー).

The black flecks that dance on the orange background give the film the appearance of being an old 16mm handmade film, but the film was edited using Photoshop and Aftereffects. In its design, Okawara’s animation gives a nod to early experimental animation. This is created through a combination of a minimalistic black on orange graphic design with the playful music inspired by Mozart’s Piano Sonata No. 14. The film score is very similar to the kind of piano scores that would accompany early Hollywood and European movies.

The visual themes of the film are that of transformation and evolution. One of my favourite moments is when a black dot transforms into an egg, which then develops a small fish inside it, which then comes out of the egg and joins to others swimming in a river. The scene wipes to a new one using the mouth of an alligator. This short sequence is just one example of how expertly Okawara transitions from one concept to the next throughout the film.

Okawara captures the same visual simplicity and dynamism of
McLaren's Hen Hop (above) in Animal Dance (below).

I see this film as a nod to the early animators – like Norman McLaren, Len Lye, and Oskar Fischinger – who transformed our understanding of the relationship between music and animation. I was particularly reminded of Norman McLaren’s Hen Hop (1942), which also uses minimalistic animation against an orange background (though the reverse orange on blue is also used) set to a song. . .  and even featuring an egg (albeit that of a chicken). For me, Animal Dance, is animation pared down to its basics. A real visual treat.