Takuo Miyagishima / 宮城島卓夫
(aka Tak Miyagishima, b. 1928 in Gardena, CA)
In 2005, Miyagishima won the Gordon E. Sawyer Award at the Oscars. This award is given out semi-annually "an individual in the motion picture industry whose technological contributions have brought credit to the industry.” The award is voted upon by the Scientific and Technical Awards Committee of the Academy. It is named after Gordon E. Sawyer (1905-1980) who won 3 Oscars for Best Sound during his long career as Sound Director at Goldwyn Studios. Miyagishima worked at Panavision for over 50 years and was highly influential in the design and implementation of new technologies during his career. Under his leadership, Panavision won an Oscar in 1978 for the Panaflex Motion Picture Camera System, as well as in 1993 for the Auto Panatar anamorphic photographic lens. 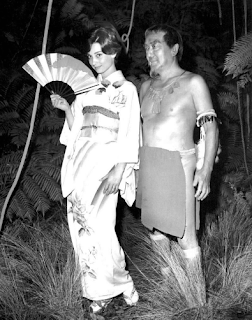 Audrey Hepburn and Sessue Hayakawa in a studio photo for Green Mansions (1959)
Carl Wakamoto wrote up a great account of the event honouring Miyagishima in Asia Pacific Arts, including an informative interview with Miyagishima himself. I particularly enjoyed Miyagishima's reaction to being presented the award by Scarlett Johansson (So [your name] didn’t get lost in translation?) and his experience growing up as a Japanese-American. There are also many terrific anecdotes on how Panavision’s reputation was once saved by Montgomery Cliff having a car crash, meeting Sessue Hayakawa on the set of Green Mansions (Mel Ferrer, 1959), and working with cinematographer Freddie Young on the lenses for Lawrence of Arabia (David Lean, 1962). Read it here.
Posted by Cathy Munroe Hotes at 4:52 am