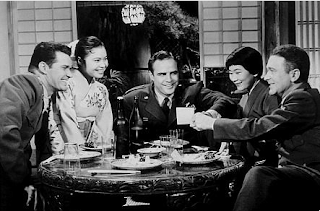 Watching the Oscar highlights this morning, I was saddened to discover that Miyoshi Umeki (梅木御代志 or ミヨシ・ウメキ) passed away last summer at the age of 78. Although her career in Hollywood was brief, the highlight came early on when she and Red Buttons (1919-2006) both won Oscars for their supporting roles in the Marlon Brando vehicle Sayonara (Joshua Logan, 1957). Umeki was the first Asian actor to win an Oscar... which makes me wonder: has another Asian actor ever won again? Sessue Hayakawa made some of his finest work pre-Oscars (the 1910s) and his chance with Bridge on the River Kwai was nipped at the post by Red Buttons. Anna May Wong was never even nominated for an Oscar.

I have a soft spot for Umeki, not just because she was lovely and an extremely gifted singer, but because she is from one of my favourite places in the world: Hokkaido. It really is too bad that her career as a film actress could not blossom much further after Sayonara, due to the stunning lack of roles for Asian actors in Hollywood -- a shameful tradition that continues to this day. I find it difficult to watch Umeki stereotyped in Flower Drum Song (1961), though her beautiful singing means that it is not as painful an experience as when Mickey Rooney tries to act "Chinese" in Breakfast at Tiffany's. The American entertainment industry was clearly going through an Oriental Phase in the late 1950s / early 1960s.

In tribute to Umeki, a fan has posted this wonderful clip of her as a guest on the Gisele MacKenzie show on March 29, 1958, just days after winning her Oscar. Click here to watch it. As was standard practice at the time, the 'interview' seems heavily scripted. I have the impression that Umeki might be exaggerating a Hollywood 'Asian accent' during the interview with Gisele. Contrast her perfect intonation and pronunciation when she sings in English with the pigeon English she speaks in the interview. I think she's playing a role, not herself. I bet that in real life her English was much better than she's letting on - her perfect distinction between r's and l's gives her away.

Umeki was clearly smart enough to know her limitations in Hollywood, and she made a name for herself through cameos on talk shows and TV series including The Donna Reed Show, Dr. Kildare, Rawhide, Mister Ed, and finally her successful stint as Mrs. Jefferson in The Courtship of Eddie's Father. From what little is known about her life after retirement, it sounds as though she enjoyed living the remainder of her life out of the spotlight. I really admire her fortitude in choosing her path in life.

Posted by Cathy Munroe Hotes at 6:39 am