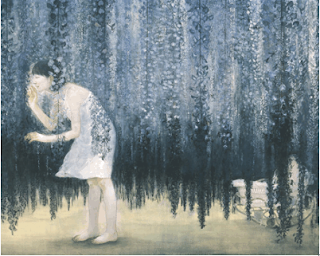 The next room displayed the work of Matsui Fuyuko (松井冬子), who was the only one of the artists to be dressed in kimono (click here to read about how she cultivates her public image) in her publicity materials. Matsui’s work presents a dark, nightmarish world, beautifully rendered muted greys, crimson reds, ghostly whites, and pitch black. Her favoured theme is madness in its many forms. I was particularly impressed by a painting of two black roosters with impossibly long tails streaming down beneath them like ribbons. The painting, entitled Deliberately Caused Insufficiency or Excess, was mounted on a beautiful black silk hanging scroll and hung between painted scrolls that Matsui admired.

Interestingly, the scrolls that she chose were quite minimalist in contrast with her more elaborate paintings such as the one shown above: Becoming Friends With All the Children in the World (2002). On first glance this girl is standing among the harmless wisteria, but if you look more closely you will see that the wisteria is covered in insects. **Shiver**—some very creepy stuff. Although Matsui has a lot of talent and I did find myself drawn to some aspects of her work I didn’t like the titles of her art very much. They were pretentiously long and seemed designed more to frustrate than to clarify the art for the spectator.