The Musicians in the Woods (もりのおんがくたい, 1960) 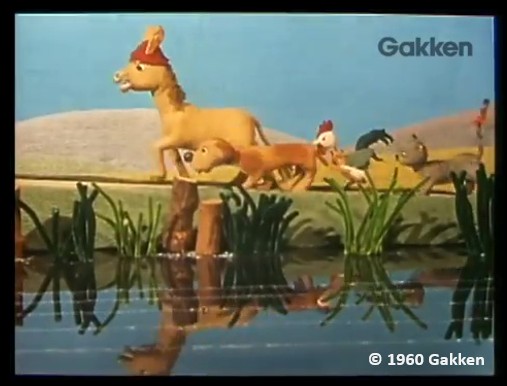 The Musicians in the Woods (もりのおんがくたい / Mori no Ongakutai, 1960) is an adaptation of the Grimm fairy tale (グリム童話) Die Bremer Stadtmusikanten (Town Musicians of Bremen / ブレーメンの音楽隊 / Bremen no Ongakutai).  It is the 27th tale in the volume one of the 1819 publication of the Grimms’ Fairy Tales.  The Japanese title, which I would translate to The Town Musicians of Mori, changes the name of the German city of "Bremen" to the common Japanese family name of "Mori" (which means forest).  This choice was likely intended to make it easier for children to understand.  The film was distributed on 16mm in the United States by Coronet Films under the title The Musicians in the Woods in 1961.

The film opens with a man riding in a wagon pulled by donkey.  He becomes frustrated by the donkey’s poor performance and tries to get him to move forward by offering him a carrot.  When the donkey shows no interest he pulls on the reins.  The donkey resists and the farmer is sent flying backwards.  This angers the farmer, who unties the donkey and tells him to get lost, giving him a kick in the backside for good measure.  The donkey decides to try his luck in town. 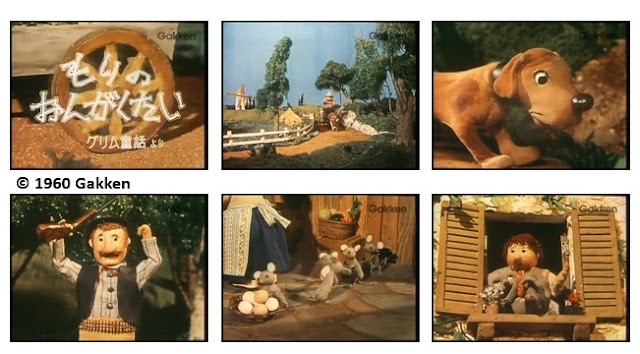 In the next scene, a hunter is frustrated by his old dog, who is too tired to help chase a rabbit.  The donkey sees takes pity on the dog and him to join his journey to town.  This scene is followed by one in which a farmer’s wife places a basket of eggs on the ground.  As soon as her back is turned, an army of mice line up and steal many eggs.  The housewife blames her old cat for this.  The cat tries to catch the mice but she is too old and the housewife throws the cat out the window.  She lands on the donkey and joins the two other animals on their way to the city. 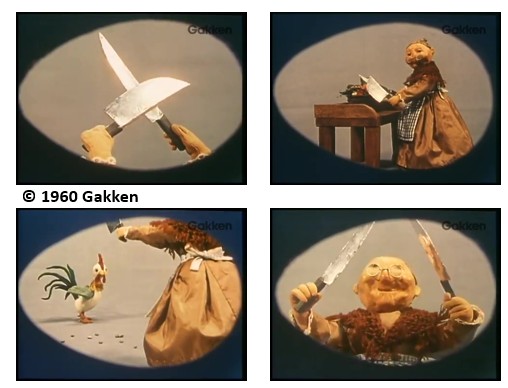 They have hardly walked a step when they hear the cries of a rooster.  With a visual flashback, we learn that the rooster is in danger of being turned into dinner.  He joins the menagerie on their journey.  They traverse a bridge and a barren landscape before coming across a cottage in the forest. They peer in the lit windows of the house and discover it is the lair of a group of bandits dressed like stereotypical pirates.  The animals watch the bandits feasting and reveling in their ill-gotten gains.  They almost get caught by one of the bandits when they make too much noise outside.  They then scare the bandits by standing on top of one another and making fearsome shadows on the windows while making terrible noises.

The bandits run away in fear and the animals run into the house and eat the food left behind.  When the animals go to bed for the night, we see that the bandits are keeping watch on the house from the hill.  They discuss whether or not the animals are bakemono (化け物 / preternatural creatures of Japanese folklore).  One of the men sneaks back into the house but is frightened by the eyes of an “o-bake”.  All four animals attack the man, but because it is dark he thinks it is bakemono.  The bandit runs back to his companions and tells them of his nightmarish experience.  They all run away in terror.  The next day, the animals celebrate their success by putting on an orchestral performance using items they found around the house and they presumably live happily ever after.

This animated short produced by Haruo Itoh (伊藤治雄) and directed by Matsue Jinbo (神保まつえ) is a fairly straightforward adaptation of Die Bremer Stadtmusikanten with scenery and puppets made in the Western style.  The story is quite similar to the original except for the scene in which the animals attack the bandit.  In the original, the man tells his companions that he was scratched by the long fingernails of a witch (the cat), cut by an ogre with his knife (the dog), hit by an ogre with a club (the donkey) and that a judge had screamed from the rooftop (the rooster).  They simplify this to blame the attack on bakemono or o-bake – a concept that Japanese children would be familiar with from folk tales. 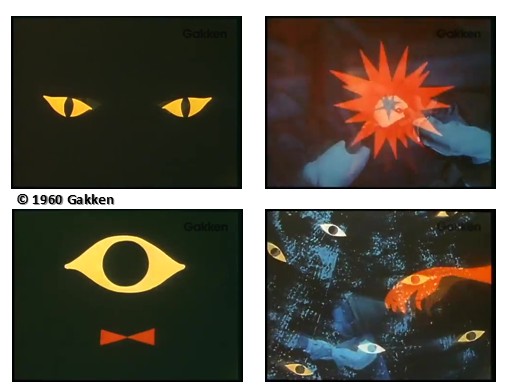 I particularly enjoyed the simple but effective techniques used to create specials effects in this stop motion puppet film.  The rooster’s flashback is cleverly indicated by a black matte shaped like an egg.  The suffering felt by the bandit when the animal quartet attacks him is amplified by the use of cartoonish “pow” shapes superimposed over the image.  The animation team was able to have a lot of fun with the man’s nightmarish flashback sequence which uses experimental techniques of superimposing symbols to convey the idea of trauma.  It reminded me of Salvador Dali’s set design for the dream sequence in Spellbound (Alfred Hitchcock, 1945).

According to the Gakken 70th Anniversary website, this film won a West German film festival prize 西独逸映画祭入賞.  Unfortunately, it does give the German name for this prize and I have as yet been unable to find more information about where the film might have screened in Germany at that time.  I have eliminated the Berlinale, the International Film Festival Mannheim-Heidelberg, and Oberhausen by checking their archives.  I will update if I learn more information.