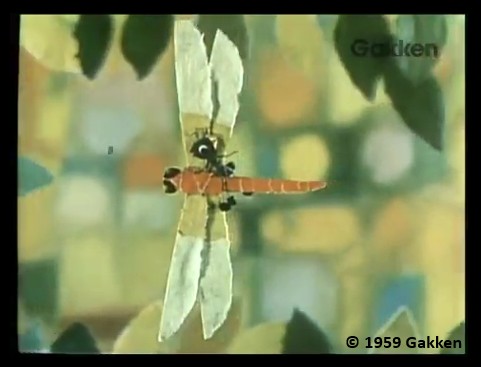 The Dove and the Ant (ありとはと / Ari to Hato, 1959) is a short animation adapted from the tale of the same name from Aesop's Fables (イソップ寓話).  It was released in the United States in 1962 by Coronet Instructional Films under the title The Ant and the Dove.  The Japanese translation of this fable traditionally puts the ant first in the title, but in English it is more common for the dove to be named first.  Coronet went with the literal translation of the Japanese title, but I prefer to use the standard English title of the fable.

A narrator tells us that this story takes place in a forest.  With a cheerful soundtrack melody in the background, a cute little ant wearing a hat is rolling a coin back to his hole. Exerting some effort (“Yoisho! Yoisho!”), he rolls the coin into a long tunnel that looks like it has been decorated with graffiti by a child.  He eventually adds the coin to a pile of loot in his living room and goes back outside in search of more treasures.

The ant encounters a snail and takes a ride on its back.  The snail climbs a tree stump where the ant discovers a dragonfly.  The dragonfly takes the ant for a ride.  They pass by the dove and the ant calls out a greeting “Hato-san konnichi-wa!”  Suddenly, he slides off the dragonfly and lands in the water.  The ant cannot swim and calls for help.  The dove hears the ant’s cries and flies to help.  Along the way, the dove picks a leaf which she drops near the ant.  The ant crawls on the leaf and floats to safety.  The ant calls out his thanks. 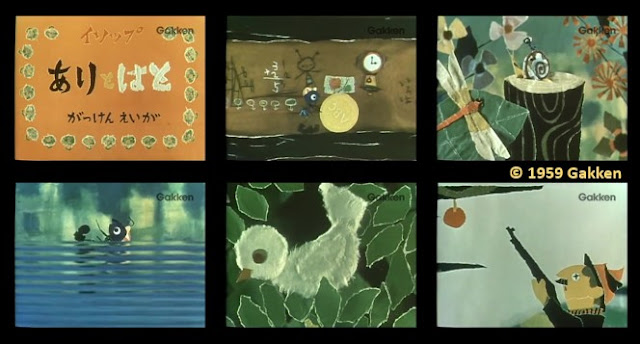 No worse for his adventure, the ant returns to collecting treasures.  The next day, a hunter is spotted in the forest.  He shoots at a tree and has an apple fall comically onto his head.  Curious and concerned, the ant follows the hunter’s every move.  He suddenly realises that his friend the dove, who is sleeping in the tree, is in danger of being shot.  He grabs some tweezers and runs up the body of the hunter.  The cry the hunter makes when the ant plucks one of his leg hairs startles the dove who flies to safety.  The ant is relieved and skips his delight as the hunter leaves disappointed.  The tale ends happily.  The final curtain is of grass, with a ladybug in the foreground for good measure.

This animation was produced by Shinichi Kanbayashi (神林伸一) and directed by Kazuhiko Watanabe (渡辺和彦).  The technique used is stop motion using cutouts and 2D puppets.  The Gakken version adds more wildlife to the forest scene (the snail, the dragonfly), likely in order to teach children about forest wildlife.  Insects are a popular theme for all ages in Japan, and preschoolers learn about them at an early age.  My children’s nursery school in Tokyo had a pet beetle in the classroom, for example.  No credit is given onscreen for the narrator, but I had the impression that one female voice did both the ant and the narration.  It is a sweet film, suitable for a preschool audience.  The “shots” fired by the hunter are only implied not actually heard, so it is unlikely that children would be disturbed by this tame portrayal of hunting.

Posted by Cathy Munroe Hotes at 12:42 am