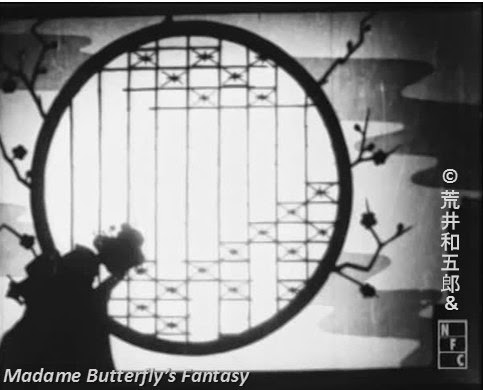 At Hiroshima International Animation Festival 2014, I had the pleasure of meeting the famous train photographer and animation expert Masatoki Minami (南正時, b. 1946).  He gave me a screener of his short documentary Wagorō Arai: His World of Silhouette Animation (荒井和五郎～影絵アニメーションの世界～ / Arai Wagorō – Kage-e Animēshon no Sekai – , 2013) which he made with the support of the JAA (Japan Animation Association).  The 16-minute film screened at JAA’s Into Animation 6 event in August 2013.

Wagorō Arai (荒井和五郎, 1907-1994) was an early Japanese animation pioneer and contemporary of Noburō Ōfuji (大藤 信郎, 1900-1961).  Inspired by the films of German animator Lotte Reiniger, whose  pre-war films were shown extensively in Japan (Donald Richie, A Hundred Years of Japanese Film, p.247), Arai and Ōfuji each developed their own brands of silhouette animation in the tradition of Japanese shadow plays and 19th century utsushi-e (写し絵 / magic lantern shows).

Minami first encountered the work of Arai at the 2nd Hiroshima festival in 1987.  He saw a screening of Madame Butterfly’s Fantasy (お蝶夫人の幻想, 1940), a 12-minute silhouette adaptation of Puccini’s Madama Butterfly (1904) and was moved by the experience.  Speaking to Arai at the festival, he discovered that the elderly gentleman was working on a new film and on October 15, 1987 he traveled to Arai’s atelier in Shinmachi (today incorporated into Takasaki-shi) in Gunma Prefecture for an interview.

For the next 2 decades, this VTR material stayed in storage and was not publicly screened.  It wasn't until Minami showed the footage to a fellow animation expert that he learned just how rare and valuable the material was, and so plans were set in motion to turn the footage into a documentary with the support of the JAA.  The screenplay was planned with the assistance of the late Prof. Masahiro Katayama (片山雅博, 1955-2011) of Tama Art University.

The documentary uses the VTR footage of Arai in his atelier in 1987 answering Minami’s off-camera questions and intercuts it with National Film Center footage of his original films.  Salient details about his life and career are also given through the use of title cards and other onscreen text.  The footage is not of the highest quality, but this really does not matter because the fact that footage exists at all of Arai talking about his craft is remarkable.  I have looked for years for information about Arai and his career and it was like looking for a needle in a haystack.  Minami’s short documentary illuminates many details I previously had not known about Arai from why his career as an animator was so short to how he made his films.

Born in 1909, Arai trained as a dentist.  His passion for silhouette animation led him to make his first film, The Gold Key (黄金の鈎 / Ougon no Kagi) in 1939.  He continued to work as a dentist and made the animation in his spare time.  His next project, Madame Butterfly’s Fantasy (お蝶夫人の幻想 / Ochōfujin no gensō, 1940) together with Jack and the Beanstalk (ジャックと豆の木 / Jakku to mame no ki, 1941) and Princess Kaguya (かぐや姫 / Kaguya Hime, 1942) solidified his place as one of the top independent animators of the early anime period.  He is unique in Japanese animation history for his dedication to silhouette animation.  The only other animator to experiment with the medium at this time, Ōfuji, also made animation in other styles, most notably cutouts using washi paper (See: Song of Spring, The Village Festival).

Minami’s interview reveals that two of his animation staff, including assistant director Nakaya Tobiishi (飛石仲也), died during World War II and their deaths were what caused him to stop making animation. In the late 1980s, he decided to make an animation called Mukashi-banashi Nagori no Futomeno (昔噺名残之太布).  This story is better known as Tsuru no Ongaeshi (鶴の恩返し), “The Crane Returns a Favour” or Tsuru Nyōbō (鶴女房), “The Crane Wife”, a popular folktale about a man who rescues a crane from a trap and the crane repays him by coming to him in the form of a beautiful woman whom he marries.  This is the project that Arai was working on when Minami went to interview him in October 1987.  In the documentary, Arai sits in a wheelchair at his animation table with various silhouettes prepared for filming and others in envelopes within easy reach.

On his New Work Mukashi-banashi Nagori no Futonuno and his Techniques:

In the afterword, Minami writes that Arai did indeed complete the film and submit it to Hiroshima
Arai died of a heart attack on 4 January 1994 at the age of 87.

Although the film is brief –  it would have been wonderful to hear more about Arai's life and times – it gives a rare insight not only into Arai's career, but also into his personality.  He comes across as someone who takes his craft seriously, but also has a sense of humour.  If it hadn't been for the tragic deaths of his animation team during the war, I feel sure we would have had many more delightful silhouette animations from this early master.

Posted by Cathy Munroe Hotes at 5:01 am