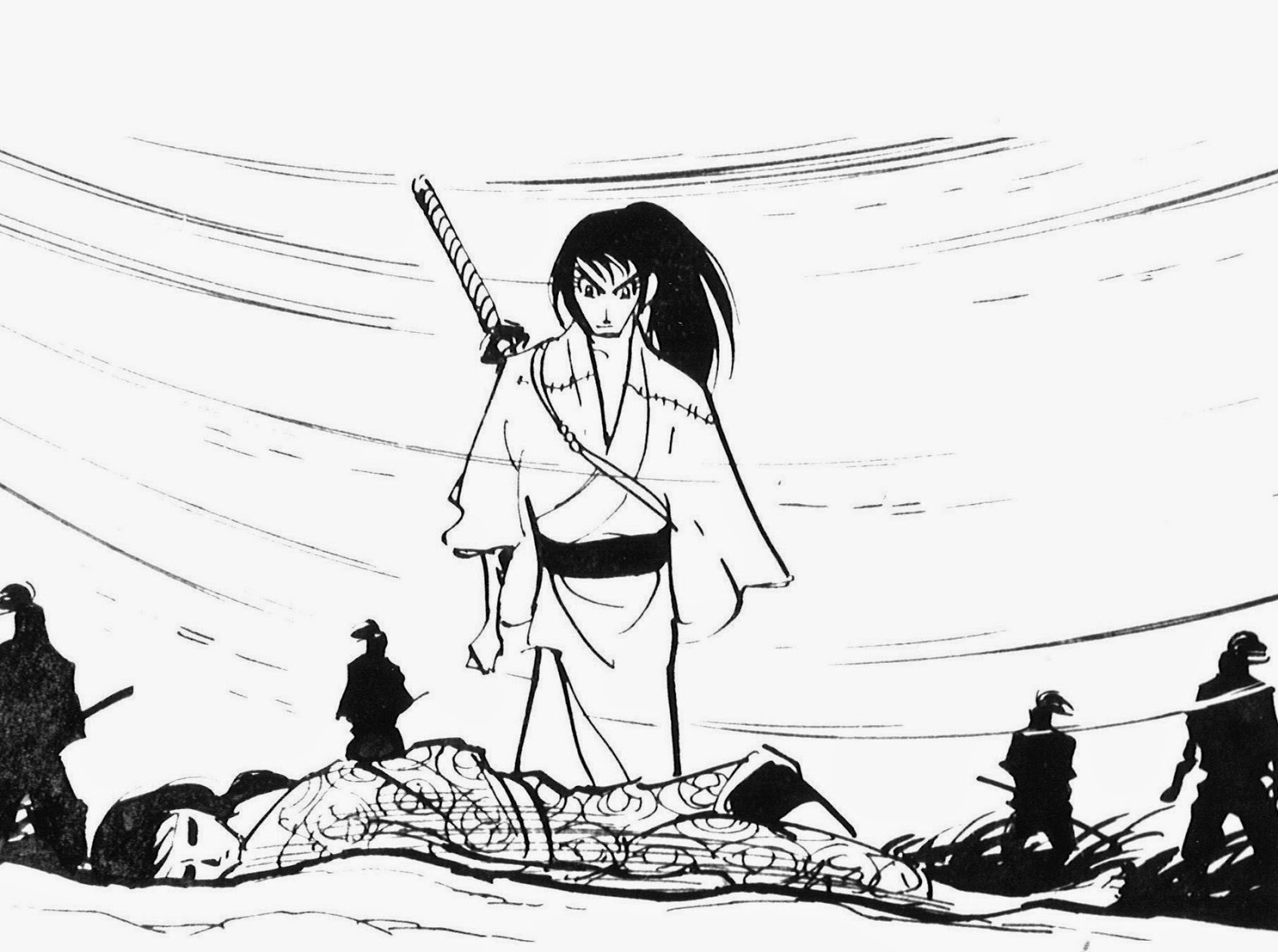 Thanks to the Japan Visualmedia Translation Academy (JVTA), we were treated to a rare screening of the full length version of Nagisa Ōshima’s “motion comic” Band of Ninja (忍者武芸帳/ Ninja Bugei-chō, 1967) at Nippon Connection 2014 with new subtitles by JVTA.  A shorter version on 35mm with an English narrator has played occasionally at Ōshima retrospectives, but as the film is only available on DVD in Japan (without subs) it was wonderful to see an HD transfer of the film with JVTA subs.  The subtitles had a black outline to make them stand out against the white background. 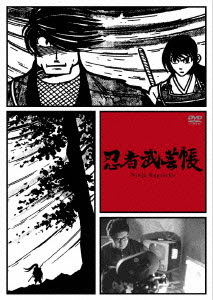 Ōshima (大島渚, 1932-2013) is best known for his innovative, and often controversial, feature films that turn an unflinching eye onto social issues often ignored by mainstream cinema.  From bigotry and xenophobia (The Catch, 1961) to state execution (Death By Hanging, 1968, read my review), and from exotic asphyxiation (In the Realm of the Senses, 1976) to torture and war crimes (Merry Christmas, Mr. Lawrence, 1983), no topic was out-of-bounds for this filmmaker whom Maureen Turim called a “Japanese Iconoclast” (The Films of Oshima Nagisa, 1998). 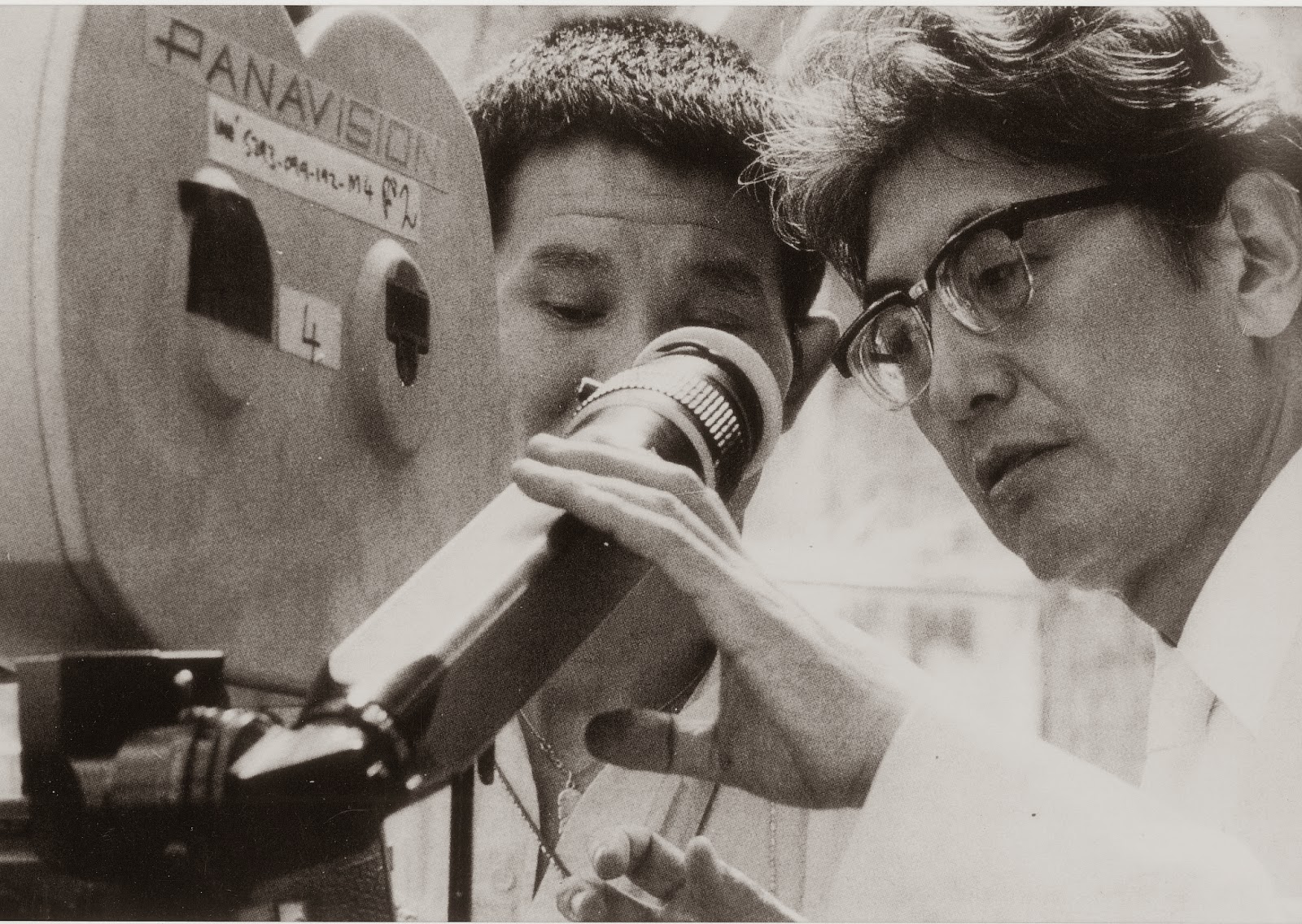 Band of Ninja stands out from Ōshima’s other work because it is neither live action, nor a documentary, but a filmed manga.  Adapted from the popular epic manga series Band of Ninja aka Tales of Ninja (忍者武芸帳/ Ninja Bugei-chō, 1959-62) by Sanpei Shirato (白土三平, b. 1932), author of the legendary Garo series Kamui Den (カムイ伝, 1964-71), Ōshima’s film is often wrongly called an animated film.  There are actually no animated sequences in Ōshima’s film.   Instead he has brought the manga to life by actually filming the original illustrations.

Although this sounds potentially very dull, Ōshima and cinematographer Akira Takada (Violence at Noon, Sing a Song of Sex), know just how to sustain visual interest. They use varying camera distances including many close-ups for character reaction shots.  A sense of movement is created by the camera itself moving across the page and frequent cutting.  The story is quite a fast-paced one, packed with changing locales and a wide swathe of characters, so there is hardly a chance to catch one’s breath.  A lot of the cinematic techniques used by Ōshima are commonplace in limited animation – particularly the way in which backgrounds are filmed.  The only difference is that the characters themselves are not moving at all either. 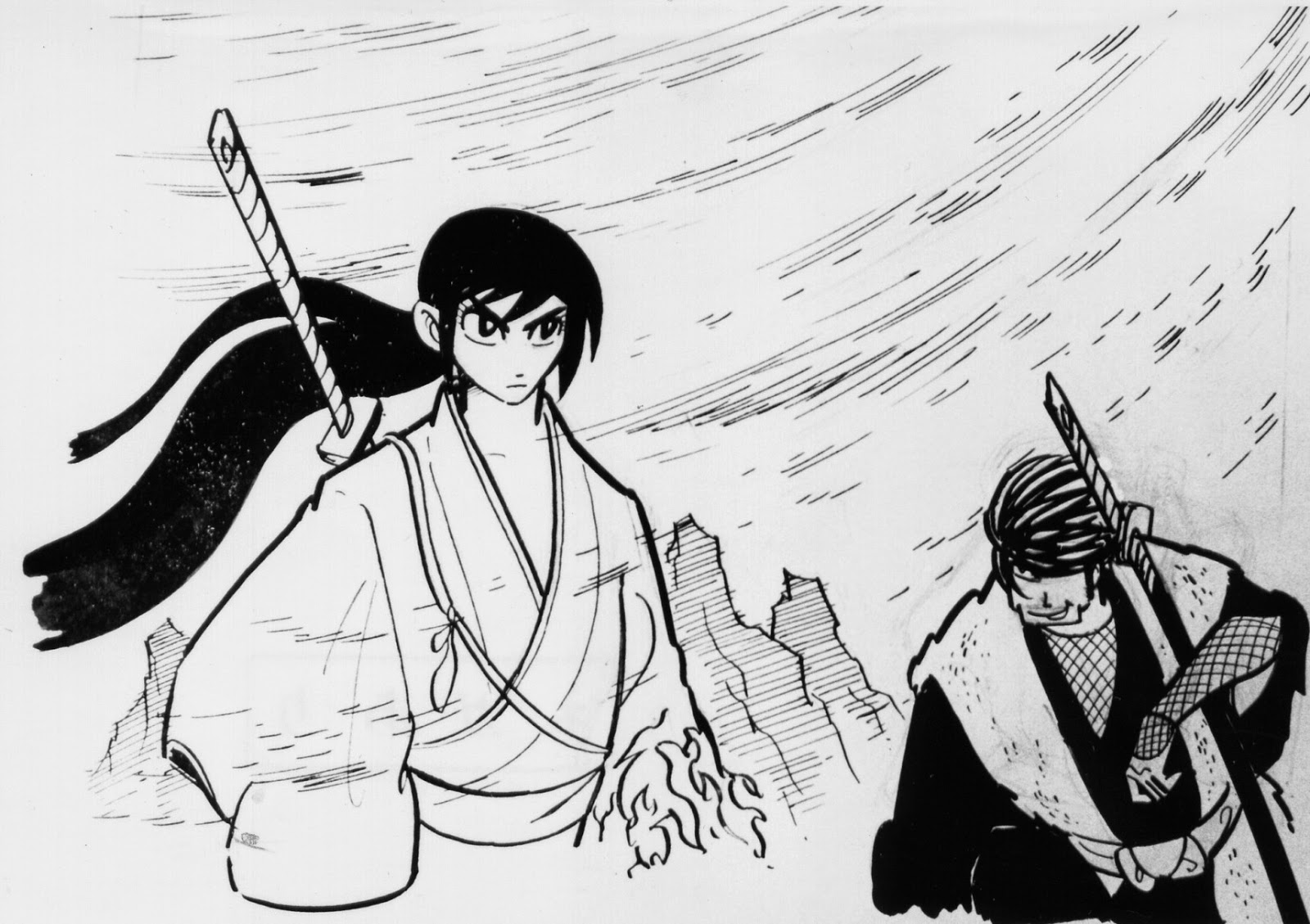 The soundtrack makes up for the lack of animation with its use of professional actors and a narrator (Shōichi Ozawa), a lively soundtrack by Hikaru Hayashi (Onibaba, The Naked Island, Kuroneko, Postcard), and excellent special effects.  The film does feel a bit on the long side at 118 minutes, but when one considers that the original manga runs to 17 volumes, it’s clear that they streamlined the story quite a bit.  Long-time Ōshima collaborator Sasaki Momoru (佐々木守, 1936-2006) helped write the screenplay and would later to go on to work on a number of popular series such as Ultraman Taro (1973) and the Isao Takahata directed Heidi of the Alps (1974).

The story begins in 1560 (Eiroku 3) during a prolonged time of great upheaval in Japan known as the Sengoku Period (c.1467 - c.1573) or the “Warring States” period.  The central characters are Kagemaru (Rokko Toura), a dashing but mysterious ninja who seems to have the ability to magically appear and save the day when a situation seems impossible; Jūtaro Yūki (Kei Yamamoto), who seeks to avenge the slaughter of his father and restore himself as master of Fushikage Castle; Akemi (Akiko Koyama), Jūtaro’s love interest and secret sister of Kagemaru; and the baddie, Oda Nobunaga (Fumio Watanabe), the evil daimyō and nemesis of Kagemaru, who seeks to unify Japan through violence and oppression.

The cast of characters is quite vast and it is hard to keep track of exactly where one is, which battle is taking place, and what year it is because the pace moves so quickly.  It is hard to imagine the manga being made as a live action film in the late 1960s because of the extreme violence and complicated special effects.  The ninja employ Kagemusha (影武者), “Shadow Warriors” or “body doubles” which could be achieved with today’s CGI but would have been difficult in 1967.  It occurred to me during the screening that Band of Ninja could easily be adapted as a kind of Japanese version of Game of Thrones.  It may seem hard to believe but I believe I saw more gruesome deaths and heads on spikes per minute in Band of Ninja than in a typical episode of Game of Thrones.

If you are a fan of manga and have a chance to see this film, I highly recommend it.  The two highlights for me where the rollicking opening Kagemaru theme song and the way the camera lovingly shows off the original artwork by Sanpei Shirato.  A must-have for any fan of ninja manga.  To learn more about the manga, I recommend: Keith J. Rainville’s vintageninja.net and Ba Zi (aka Nicholas Theisen)’s What is Manga?