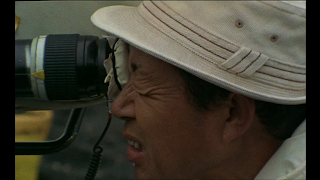 Along with Teruyo Nogami, cinematographer Takao Saitō (斎藤孝雄, b. 1920) is one of the few surviving members of Akira Kurosawa’s core group of regular collaborators.
1.  Toho Studios

A native of Kyoto, Saito entered Toho Studios as a camera assistant in 1946. His first film at the studios was Kurosawa’s One Wonderful Sunday

He is sometimes confused with the manga-ka Takao Saitō

(斎藤隆夫 aka さいとう・たかを, b. 1936) – same name when Romanized, different spelling in Japanese. The manga-ka does have a cinema connection however, as films like King Kong

(Byron Haskin, 1953) were highly influential on his artistic development.
3.  Asakazu Nakai
Saito began as an assistant to Asakazu Nakai (1901-1988), a cinematographer who worked on more Kurosawa films than any other. They worked together for over 40 years beginning with No Regrets for Our Youth (1946).
4.  Camera B in Kurosawa’s 3 Camera Set-Up
Starting with Seven Samurai

, Kurosawa used multiple cameras and more than one cinematographer. Saito was always assigned camera B, and given free rein to film as he pleased. “Whenever Kurosawa looked at the dailies”, recalls Teruyo Nogami in Waiting on the Weather, “he would murmur, ‘Interesting,’ and linger with pleasure over what the B camera had turned out. Today, Saito is the last cameraman to enjoy Kurosawa’s full confidence.” (Nogami

Nogami has described Saito’s role on set as being “wifely. . . crucial, yet inconspicuous. He was proficient at both panning shots and dolly shots, using a telephoto lens of 500 or 800mm so that the picture had speed and the rough, protruding quality that Kurosawa liked.” (Nogami 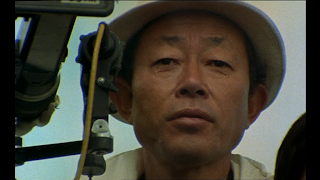 During this close-up of Saito’s face in AK

, Chris Marker reflects: “those were the eyes which saw Mifune being riddled with arrows in Throne of Blood

, or stabbing youthful Nakadai in Sanjuro

’s documentary about Kurosawa’s later years, Saito said that “when he wrote a script, he already had a picture of every scene in his mind. So when he showed me the actual storyboards, they were all very practical showing exactly what to do. He was very easy for a cameraman to work with.” (Kurosawa: The Last Emperor, 1999)
9.  Albert Pyun
Saito acted as a mentor to the Hawaiian-American cult film director Albert Pyun. Toshiro Mifune had seen one of Pyun’s films at a festival and invited him to come to Japan to do an internship. Pyun cites his time working as an assistant under Saito as a transformative moment in his career (see Planet Origo).
10.  Awards
Saito was nominated for an Oscar for Kurosawa’s Ran

(1985). Together with his co-cinematographer Shōji Ueda, he won Japanese Academy Awards for Best Cinematography for Madadayo 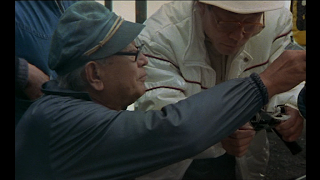 With Kurosawa on the set of Ran (1985)
As a camera assistant:
1947 One Wonderful Sunday

As a cinematographer:
1962 Sanjuro